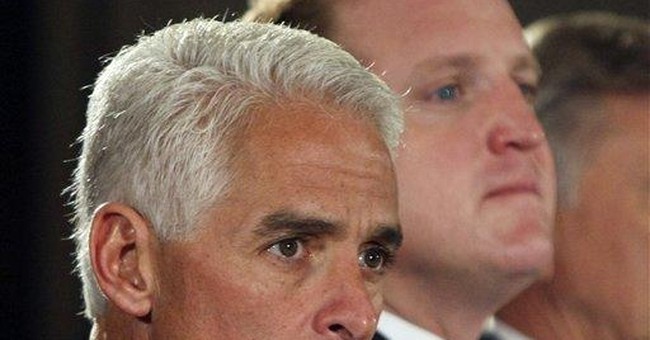 MIAMI -- Florida, a geological afterthought, was the last portion of what are now the lower 48 states to emerge from the ocean, and it emerged halfheartedly: Its highest point is just 345 feet above sea level. But the fourth-most-populous state will loom over American politics next summer when Republicans select a Senate nominee. Their primary will test whether the party has become so risk-averse that it flinches from interesting choices.

The nominee almost certainly will be either Gov. Charlie Crist or Marco Rubio, former speaker of the Florida House (term limits, which he supports, retired him). Leading national Republicans rushed to endorse Crist. In tennis, such decisions are called unforced errors.

Republican Sen. Mel Martinez was elected in 2004. In 2007 the Republican National Committee, worried about declining GOP strength among Hispanics, made Martinez, who was born in Cuba, chairman of the party, a position for someone with a zest for politics. Last December, however, Martinez said he would not seek re-election to the Senate, and last month he said he would not even wait until 2010 to skedaddle. He resigned.

Not wanting to be a senator is understandable, but it is a nuisance to voters who thought Martinez did want to be, and to Senate Republicans, who number only 40, one short of the total needed to stop a Senate action. In 2010, the GOP and the Democrats both will be defending 19 seats. Because so many companies do business with state governments, governors are fundraising dynamos, so a Crist nomination would not burden the national party, which helps explain why party leaders like him. But that is myopic reasoning.

Crist appeared at a rally with Barack Obama promoting the $787 billion stimulus that got no votes from House Republicans and only three from Republican senators. He is a climate-change worrywart who wants to cap Florida's carbon emissions. He has chosen his former campaign manager to serve as a placeholder in the Senate during the crucial next 16 months.

And in order to reduce property insurance costs, especially for Floridians living near the nation's second-longest coastline, Crist expanded, and vetoed reform of, the state's reckless version of a property insurance "public option." It is government-run insurance that, by offering rates lower than rational assessments of risk would dictate, has driven private insurers to limit their business or even stop doing business in the state. When a huge hurricane hits, Florida -- and U.S. -- taxpayers might have to foot the bill, by which time Crist plans to be in Washington.

Rubio, who is 38 and in a decade might look that old, says Crist will not be there. Crist, says Rubio, "never thought he'd have to run in a Republican primary again." Probably only about 20 percent of Florida's 4 million registered Republicans will vote in the closed primary in late August in a nonpresidential year. So, about 450,000 votes might win it. That many can come from Republicans who are attentive to politics even in late summer because they are ideologically driven.

As is Rubio, which is why National Review, the bimonthly encyclical of the church of conservatism, had him on a recent cover and why the Club for Growth, a group that contributes to Republicans friendly to free markets, should support him. Crist has a large lead in name recognition, and hence in polls. But where Rubio and he are both known, they are neck and neck.

A Catholic and father of four, Rubio, whose parents fled Cuba in 1959, says, "It is hard to be apolitical when you are raised by exiles." He worries that his children's generation "will be the first to inherit a diminished country." His preventive medicine includes limited government, tax reform, spending restraint and removal of all impediments to the entrepreneurship that makes America a place "where poor people can put billionaires out of business."

Florida will not soon be pushed back under the ocean by the weight of its expanding population. For the first time since the Second World War, the state lost population -- 58,000 people -- in a 12-month period (April 2008 to April 2009). In January 2011, one Floridian will leave for the U.S. Senate. He is unlikely to be a former governor at odds with his party's nominating electorate, or the probable Democratic nominee, Kendrick Meek, a hyper-liberal congressman. Rubio intends to prove that "in the most important swing state, you can run successfully as a principled conservative." He probably will.