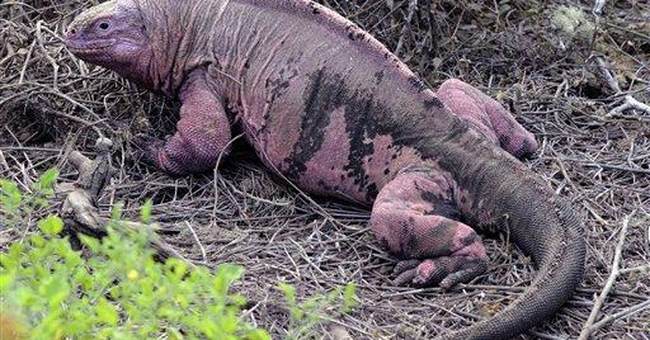 WASHINGTON -- "Descended from the apes!" exclaimed the wife of the bishop of Worcester. "Let us hope that it is not true, but if it is, let us pray that it will not become generally known."

An American majority resists such an annoying notion, endorsing the proposition that "God created human beings pretty much in their present form at one time within the last 10,000 years." Still, evolution is a fact and its mechanism is natural selection: Creatures with variations especially suited to their environmental situation have more descendants than do less well-adapted creatures.

This Thursday, the 200th anniversary of the births of Charles Darwin and Abraham Lincoln, remember that Lincoln mattered more. Without Darwin, other scientists would have discerned natural selection. Indeed, Darwin's friend Alfred Wallace already had. Without Lincoln, the United States probably would have been sundered into at least two nations. Probably into more: Southerners, a fractious tribe, would not have played nicely together in the Confederacy for very long.

Unlike Lincoln, Darwin still disturbs humanity's peace of mind. Some people flinch from the idea of natural selection, aka "survival of the fittest," because it suggests Lord Tennyson's "nature, red in tooth and claw." But Darwin, in the last paragraph of "The Origin of Species," saw beauty:

"Thus, from the war of nature, from famine and death, the most exalted object which we are capable of conceiving, namely, the production of the higher animals, directly follows. There is grandeur in this view of life, with its several powers, having been originally breathed into a few forms or into one; and that, whilst this planet has gone cycling on according to the fixed law of gravity, from so simple a beginning endless forms most beautiful and most wonderful have been, and are being, evolved."

Walt Whitman, seared by Lincoln's war to guarantee the nation's survival, adopted a materialist's mysticism about the slaughter: Human immortality is in earth's transformation of bodies into an "unseen essence and odor of surface and grass, centuries hence."

After Copernicus dislodged humanity from the center of the universe, Marx asserted that false consciousness -- we do not really "make up our minds" -- blinds us to the fact that we are in the grip of an implacable dialectic of impersonal forces. Darwin placed humanity in a continuum of all protoplasm. Then Freud declared that the individual's "self" or personhood is actually a sort of unruly committee. All this dented humanity's self-esteem.

Still, many people of faith find Darwinism compatible with theism: God, they say, initiated and directs the dynamic that Darwin described. In the end, Darwin, in spite of perfunctory rhetorical references to "the Creator," disagreed. As a scientist dealing with probabilities, and with a profoundly materialist theory, he had no intellectual room for a directing deity that wills a special destination for our species.

Darwin's rejection of premeditated design helped to validate an analogous political philosophy. The fact of order in nature does not require us to postulate a divine Orderer, and the social order does not presuppose an order-giving state. As a practical matter, we cannot expel government from our understanding of society as Darwin expelled God from the understanding of nature. But Darwinism opens the mind to the fecundity of undirected, spontaneous, organic social arrangements -- to Edmund Burke and Friedrich Hayek.

Speaking of government, in 1973 Congress passed the Endangered Species Act. It said that when identifying an "endangered" or "threatened" species, the government should assess not only disease, predation and threats to its habitat but also "other natural ... factors affecting its continued existence." Natural factors?

Four years later, the act held up construction of a Tennessee dam deemed menacing to the snail-darter minnow. Ed Yoder, a learned and sometimes whimsical columnist, noted that it was under Tennessee's "monkey law" that John Scopes was tried in 1925 for teaching biology in a way considered incompatible with "Genesis." While not equating Tennessee's law with "a measure so enlightened" as the 1973 act, Yoder noted:

"Both measures involve legislative interposition in the realm of biological change; and which will have involved the greater hubris is yet to be seen. Tennessee's ambitions were comparatively modest. It sought only to conceal the disturbing evidence of natural selection from impressionable school children. The Congress of the United States, one is intrigued to learn, intends to stop the nasty business in its tracks."

Having accomplished that, it should be child's play for Congress to make the climate behave. Pick your own meaning of "child's play."