Freedom of Choice in Health Care 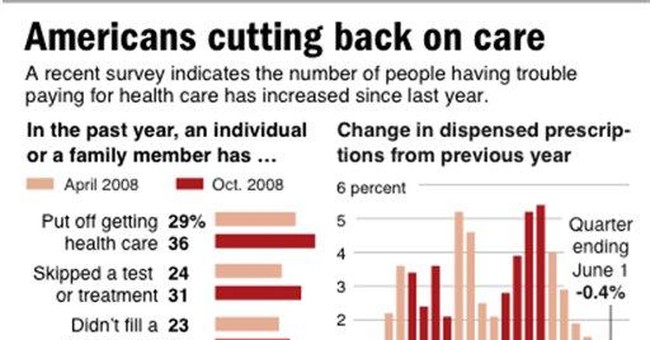 WASHINGTON -- On Election Day, Arizonans can give the nation the gift of a good example. They can enact a measure that could shape the health care debate that will arrest or accelerate the nation's slide into statism. Proposition 101, "The Freedom of Choice in Health Care Act," would put the following language into Arizona's Constitution:

What do those people favor who oppose Proposition 101? Some support legislation sponsored by the Democratic leader in the state House of Representatives. It would establish a severe single-payer system, proscribing private health insurance in the state and requiring almost everyone not on Medicare to enroll in a state health care program. Under that program, a state commission would stipulate the menu of services and medications, and could even decide which hospitals could add which technologies.

A similar bill reached the desk of California's Gov. Arnold Schwarzenegger, who vetoed it, partly because it lacked a funding mechanism. Such legislation essentially aims to replicate Canada's system, under which, generally speaking, medically necessary physician and hospital services are available only from the government health insurance system.

Opponents of Proposition 101 are against what it would guarantee, including the right of individuals to pay directly for medical services without needing the permission of a third party. Proposition 101 would emancipate service providers from requirements that they either charge fees set by the state, or charge nothing.

Proposition 101 would prevent employer or individual mandates of the sort imposed in Massachusetts. That is, it would prevent "pay or play" systems, under which employers must either pay for employees' health insurance or pay into a state pool that finances insurance for them.

In the name of cost control, but actually in the service of self-serving crony semi-capitalism, some opponents of Proposition 101 want to restrict access to alternative services. These opponents include some government bureaucrats who run Arizona's Medicaid system, and some hospitals, established health insurers and physicians groups who understand that it is easier to lobby for government contracts than it is to persuade individuals to purchase this or that product.

Proposition 101 would protect Arizonans not only against abridgements of their liberties by their state government, but also perhaps against comparable actions by the federal government. Clint Bolick, director of the Goldwater Institute's Center for Constitutional Litigation, believes that if Washington were to enact a national health insurance program of prescriptive regulations, Proposition 101 would trigger an epochal constitutional clash "between state sovereignty and national power."

In 1997, the U.S. Supreme Court said: "The Constitution established a system of 'dual sovereignty.' ... It is an essential attribute of the states' retained sovereignty that they remain independent and autonomous within their proper sphere of authority." Therefore, says Bolick, any national health insurance scheme would be vulnerable to constitutional challenge because it would impermissibly command actions by state officials. Furthermore, Bolick says: "It is a bedrock principle of constitutional law that the federal Constitution established the floor for the protection of individual liberties; state constitutions may provide additional protections."

Now, Proposition 101's language leaves ample room for litigation about what would constitute an impermissible abridgment of an individual's right to "make decisions" about health care. Still, if Arizonans pass Proposition 101, residents of other states will have a template for resistance to contemporary liberalism's next lunge toward its unvarying goal -- enlargement of government supervision of our lives.

Proposition 101's premise is: "The market is the best mechanism ever invented for efficiently allocating resources to maximize production" and "there is a connection between the freedom of the marketplace and freedom more generally." So The New York Times was told in August by Barack Obama who, no stickler for consistency, said in 2003, "I happen to be a proponent of a single-payer universal health care plan." As an earlier occupant of the Senate seat Obama occupies -- Everett Dirksen -- said: "I live by my principles, and one of my principles is flexibility."