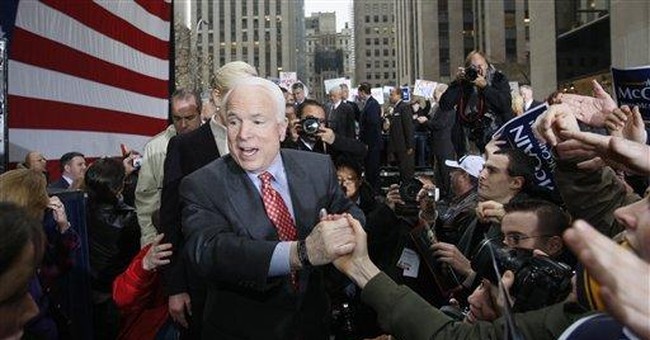 LOS ANGELES -- Forewarned, Democrats now are forearmed -- not that they will necessarily make sensible use of the gift. Tuesday's voting armed Democratic voters with the name of the candidate that their nominee will face in the fall. Will their purblind party now nominate the most polarizing person in contemporary politics, knowing that Republicans will nominate the person who tries to compensate for his weakness among conservatives with his strength among independent voters who are crucial to winning the White House?

Perhaps. The Republican Party's not-so-secret weapon always is the Democratic Party, with its entertaining thirst for living dangerously.

John McCain has become the presumptive nominee of the conservative party without winning majority support of conservatives. According to exit polls, he lost them Tuesday to Mitt Romney in his home state of Arizona, 43-40. He lost them in that day's biggest battleground, California, 43-35.

The surest way to unify the Republican Party, however, is for Democrats to nominate Hillary Clinton. Barack Obama, the foundation of whose candidacy is his early opposition to the war in Iraq, would be a more interesting contrast to the candidate who is trying to become the oldest person ever elected to a first presidential term, and who almost promises a war with Iran ("There is only one thing worse than military action, and that is a nuclear-armed Iran").

Obama's achievements on Tuesday would have been considered astonishing just two weeks ago, but they have been partially discounted because the strength of his ascendancy became so apparent in advance. And he would have taken an even larger stride toward the nomination were it not for a novelty that advanced thinkers have inflicted on the political process.

Once upon a time, in an America now consigned to the mists of memory, there was a quaint and, it is now said, oppressive custom called Election Day. This great national coming together of the public in public polling places, this rare communitarian moment in a nation of restless individualists, was an exhilarating episode in our civic liturgy. Then came, in the name of progress, the plague of early voting.

In many states, voting extends over weeks, beginning before campaigns reach their informative crescendos. This plague has been encouraged by people, often Democrats, who insist, without much supporting evidence, that it increases voter turnout, especially among minorities and workers for whom the challenge of getting to polling places on a particular day is supposedly too burdensome.

The plague made many Super Tuesday voters -- those who hurried to cast their ballots for John Edwards, Rudy Giuliani and other dear departeds -- feel like ninnies, which serves them right. On Tuesday, the Democratic Party paid a price for early voting, especially in California, where more than 2 million votes were cast in the 29 days prior to what is anachronistically called Election Day. The price was paid by the party's most potentially potent nominee, Obama, whose surge became apparent after many impatient voters had already rushed to judgment.

Although Obama lost California to Clinton by 380,000 votes, he surely ran much closer in the votes cast on Tuesday, after her double-digit lead in polls had evaporated. Had he won the third of the three C's -- he won Connecticut, where a large portion of voters are in her New York City media market, and in Colorado, a red Western state rapidly turning purple -- he might now be unstoppable.

Evangelical Christians, who in 2006 gave Republicans more votes than Democrats received from African-Americans and union members combined, wanted to determine the GOP's nominee -- and perhaps they have done so. By giving so much support to an essentially regional candidate, Mike Huckabee, rather than to Mitt Romney, they have opened McCain's path to capturing the conservative party without capturing conservatives. McCain's Tuesday triumph was based in states (New York, New Jersey, Illinois, California) he will not carry in November.

Although Obama is, to say no more, parsimonious with his deviations from liberal orthodoxy, he is said to exemplify "post-partisan" politics. The same is sometimes said of McCain. Five days before Super Tuesday, McCain received an important endorsement from California Gov. Arnold Schwarzenegger, another supposed practitioner of post-partisanship, which often looks a lot like liberalism that would prefer not to speak its name. Three days before that endorsement, the emblem of Schwarzenegger's post-partisanship -- his extremely liberal (lots of mandates and taxes) and expensive ($14.9 billion, slightly more than the state's current budget deficit) plan for universal health care -- died in an 11-member state Senate committee, where it got just one vote.

Perhaps we are seeing the future. It looks familiar.