Has Congress Ever Really Balanced the Budget?

Newt Gingrich has taken credit for balancing the budget in 1998 through 2000, when he was Speaker of the House.  For that matter, you will hear many politicians taking credit for the “Balanced Budget”. If you look at the official numbers on the surface, this seems to be true.

However, maybe they are ignoring the underlying drivers and undeservingly taking credit for financially engineering the surplus. Many things are possible with the typical Washington fuzzy math. According to the Federal Reserve, here are the figures: 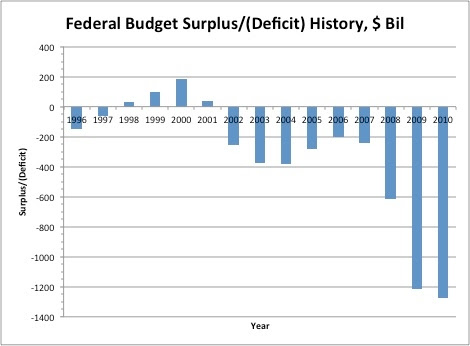 You can see clearly by this graph that there actually was a surplus for the years 1998-2001.  However, if you remember the definition of surplus (income less expenses) there are two items to consider.  Government income is separate from Government expenses.  Congress can only control expenses.  For the most part, income is unpredictable – 81% of Government income comes from the individual payroll tax plus individual income tax.

Let’s go back to the data and look at government spending over the years - this is really what Congress can and does directly control. Since 1996, government expenses have grown 3.4% per year and have never had a down year, as the graph below shows.  That is to say they have never actually “cut” Government expenses.  It goes up every year.

This is also true in the years of 1998-2001, when the budget was supposedly “balanced,” and everyone from Bill Clinton and the Democrats to Newt Gingrich and the Republicans have taken credit for it.

What could possibly account for this large increase in revenues?  Maybe it’s the wisdom and intelligence of our leadership in Washington. Let’s look back at the stock market for that period and review how the market may have been related - in particular, the NASDAQ Composite Index.

You may recall the NASDAQ increased four times from 1996 to 2000 in one of the biggest bull markets of all time.  The increase in individual income taxes was primarily due to profit taking and taxes paid by individuals.  This is the real explanation as to why tax revenues  were at a record high in 2000. 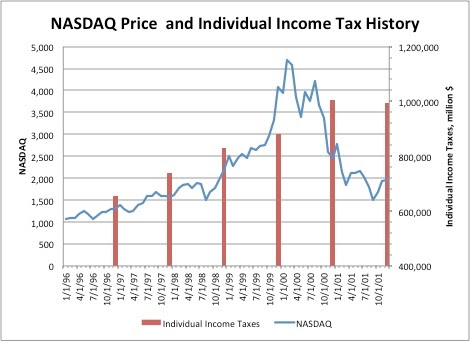 Politicians claiming credit for balancing the budget are giving us nothing more than Washington double talk and a rewriting of the facts.