Gavin Wax
|
Posted: Mar 30, 2020 11:14 AM
Share   Tweet
The opinions expressed by columnists are their own and do not necessarily represent the views of Townhall.com. 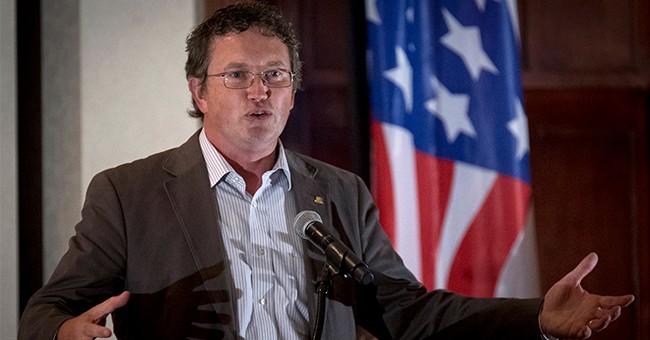 President Donald Trump is inexplicably calling for Republicans to remove Rep. Thomas Massie from their party. For what? For whom? This latest example of Trump treating his supporters worse than the Never Trumper crowd could impact his 2020 prospects.

Despite attacks from across the political establishment, mainstream media, and the president himself, the Kentucky congressman is slowly gaining recognition as the heroic underdog he is.

Trump calls Massie a “do nothing,” “third rate grandstander” who should be thrown out of the Republican Party. Was 2015 that long ago that the president can’t recall this same onslaught against him that helped seal his populist bonafides?

Massie’s crime was demanding a roll call vote on the $2.2 trillion coronavirus stimulus bill that Trump just signed. It spends more than twice what FDR’s New Deal cost, and yes that accounts for inflation. It’s the most expensive legislation in American history.

The Constitution is on Massie’s side, not only when it comes to his refusal to support the bailout bill, but also in terms of the political process that Massie exposed. The Congress was set to use “unanimous consent” to pass the bill, without even showing up to the nation’s capital.

In the end, Massie’s action proved not to delay any vote. That wasn’t reported by the mainstream media, which chose to hammer on the dubious health risks Massie posed by doing his job.

In effect, Trump sided with the fake news media against one of his strongest supporters in D.C.

On Afghanistan, Massie supported Trump against the military establishment, saying the president “deserved the Nobel Peace Prize if he ends this war.”

This one-sided skirmish comes at a fragile time not just for the economy, but Trump’s reelection campaign as well. Yes, his approval rating is higher since the COVID-19 crisis, but it’s not exactly in post-9/11 George W. Bush territory.

Populist sentiment may very well grow this year, but Trump can’t afford to see it split in the slightest, should Massie’s appeal grow. That’s a real possibility after Trump staked his presidency first on the success of the stock market and then on managing this coronavirus response.

That’s not to suggest that Massie wouldn’t endorse Trump, but libertarians and independents who admire Massie might vote Libertarian Party or sit out 2020. It’s not on the same scale as Senator Bernie Sanders inevitably endorsing Joe Biden, but the principle is the same in that their endorsements may fall on deaf ears.

Who is advising Trump to go harder against Massie than the president has ever gone against his adversaries in the Republican Party?

Without inside knowledge, it is unknowable. Nevertheless, this sort of attack in politics, whether or not it comes in four tweets, is usually premeditated.

Things certainly didn’t go as planned, Trump’s campaign manager Brad Parscale found out in the replies to his tweet against Massie.

If bad advisors led Trump to make this move, they likely anticipated a typical reaction from Massie that would play into Trump’s hands. However, Massie is not your typical politician.

Massie, an MIT-educated engineer, is disciplined, smart, and above all loyal enough to know not to return fire Trump’s way.

In fact, Massie spoke with Trump directly prior to the vote and left a message with a secretary after the vote. Massie told Fox News’ Neil Cavuto that Trump was “unconvinced,” but that he didn’t have a complete understanding of how Massie’s actions weren’t delaying the bill’s passage.

“This is the third coronavirus bill, by the way I voted for the first one,” Massie said. “Nancy Pelosi already has a fourth one planned.”

For principled stands like these, Massie is deemed a failure in the press. Now, our president is using the same language, calling him a “disaster,” etc.

It’s a shame, because Trump was elected as a fighter. This year especially, he should take note of the fighting spirit Massie brings to work every day.

Whether or not this Trump-led effort to oust Massie succeeds, the Kentuckian will come out the winner when historians look back at how Trumpian populism lost its moxie, choosing bloated, pork-filled bailouts over the honest voice on the side of the people.