Gary Schneeberger
|
Posted: Jul 31, 2020 12:01 AM
Share   Tweet
The opinions expressed by columnists are their own and do not necessarily represent the views of Townhall.com. 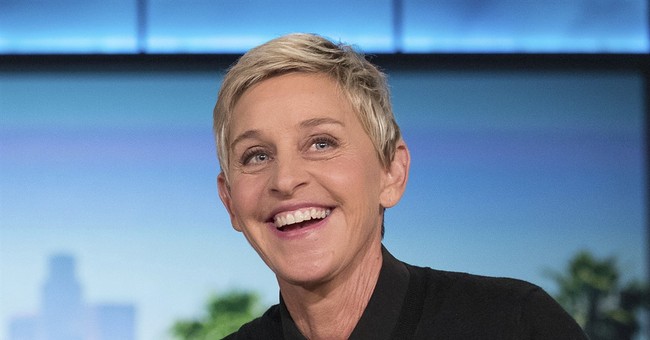 Ellen DeGeneres may not be able to dance her way out of this one.

America’s talk show sweetheart is under a fusillade of fire for the alleged “toxic” work environment of her beloved, 12-time-Emmy-winning daytime series. It’s getting so bad for her, one branding expert said a few days ago that the accusations against the show could bring an “apocalyptic ending to her TV career.”

And what has she been accused of? Something as abusive, and illegal, as what toppled Bill Cosby or Harvey Weinstein? No. The producers of the show responsible for its day-to-day operation have been called out for such things as “bullying” and “racial microaggressions” – charges rightly being investigated. Ellen herself has only been charged with such offenses as being “cold” and “mean” and – gasp! – not saying “hi” to a bodyguard assigned to protect her. Translation: She may be guilty of pampered, even egotistical, star behavior. That puts her in a long line, but should not put her on the firing line.

The true “crimes” the cancel culture is after Ellen for having less to do with her being a boorish celebrity than for being friends with a conservative Republican former president.

Think back to last fall, and the social-media gang-tackling she endured when cameras caught her sharing some laughs sitting next to George W. Bush at a Dallas Cowboys football game. The two, you may remember, were among the guests of team owner Jerry Jones invited into his private box to enjoy the game. When TV cameras caught the pair appearing to enjoy each other’s company rather than coming to culture-war blows, Ellen got lambasted ceaselessly from her side of the ideological aisle.

“Crooks of a feather, flock together,” one Twitter user wrote, calling her a “#FakeLiberal Corporate Fascist shill” and throwing in that Bush was a “Psychopath & Traitor” for good measure.

Ellen was asked by another Twitter user, “How does it feel to watch a game with a mass-murdering genocidal war criminal?” And another opined: “It doesn't matter if you're gay or straight. Just untouchably rich. And white, of course.”

So out-of-control was the controversy that Ellen was forced to address it in her monologue the next day.

"People were upset," she understated. "They thought, ‘Why is a gay Hollywood liberal sitting next to a conservative Republican president?  Here's the thing. I'm friends with George Bush. In fact, I'm friends with a lot of people who don't share the same beliefs that I have.

“Just because I don't agree with someone on everything doesn't mean that I'm not going to be friends with them," she added. "When I say, ‘Be kind to one another,' I don't only mean the people that think the same way that you do. I mean be kind to everyone.’ "

Some applauded her big-tent practice of friendship, but many remained unmoved and savaged her in the press. Ellen DeGeneres, whose mantle is filled with awards of appreciation from liberal organizations and causes, had lost her “one of us” card and was not going to get it back.

“Being nice to Bush means in turn disrespecting those whose lives were destroyed by his disastrous administration,” wrote Naomi LaChance at Splinter News, summing up much of the second-round backlash. “You literally cannot be kind to everyone. You have to choose a side! Ellen certainly has.”

Now, I have worked in Hollywood. As a senior vice president of publicity for a firm that did business with every film studio and many production companies and TV networks. I have attended meetings with high-powered executives who nonetheless carried scarcely a sliver of the clout Ellen DeGeneres has. Very few of them ever said a casual “hi” to me. When on press junkets with A-list actors, I was never told not to talk to them (as some of Ellen’s employees say they have been instructed when crossing paths with her) but I knew my job was not to be buddy-buddy with the talent.

Brusqueness and not fraternizing with the cogs in the industry machine are as commonplace in the entertainment industry as television shows hosted by Gordon Ramsay. The attitude that governs Hollywood is that if you don’t want the job, somebody else with stars in their eyes does. So, I am not shocked to hear that the Ellen show might treat its staffers in ways they feel to be “nightmarish” when it comes to how they are spoken to and how easy it is to get a day off – even for a good reason. It’s not best-workplace practice, but Hollywood’s never angled for that honor.

Those who run Ellen may never win a Best Places to Work award, and Ellen herself may never get her hands on a World’s Best Boss coffee mug. But make no mistake about it: the bad press she is getting at the moment – at a time in the investigation when no accusation of anything illegal or even of serious wrongdoing has been leveled in her direction – is not because she wasn’t nice enough to a bodyguard. It’s because she was too nice to the “wrong” ex-president.

And that says plenty about how toxic our culture has become.