Snyder’s Road Tax Reforms is a Bad Path for Michigan 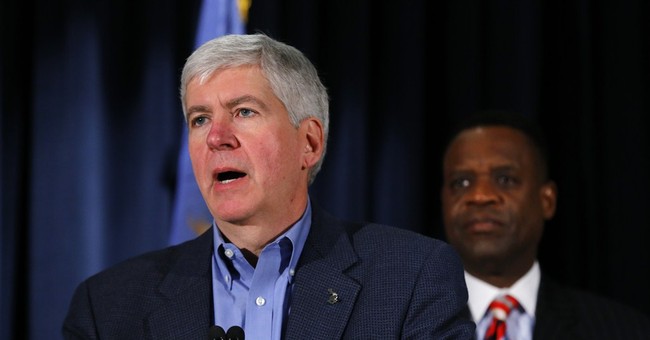 After the 2014 midterm elections, a lame-duck session of lawmakers got together to strike one final blow against the citizens of Michigan who voted them out. They are pushing for a new tax reform that would tie Michigan for having the second-highest state sales tax in the country at 7 percent. The lawmakers claim that the revenue is needed to fund government services like and local schools and roads despite the fact that it would also double Michigan’s fuel tax, making it the highest in the country. For the sake of the Great Lake State’s economy, Michiganders should reject such a dangerous reform when it goes to the ballot in May of 2015.

Gov. Rick Snyder and legislative leaders from both parties backed a complex plan that included a gas tax hike that will earn the state $1.2 billion in revenue by charging Michigan drivers twenty three more cents per gallon. As if that isn’t enough for the tax-and-spend state government, the plan will generate an additional $1.34 billion by increasing the sales tax to 7 percent and by enforcing it on online retailers like Amazon.com, making it more expensive for Michigan citizens to purchase more goods to make their lives better. Lastly, the plan will generate $95 million in additional revenue by raising various registration fees. Over the long term, these fees are expected to take $210 million out of the pockets of Michiganders. The plan also provides $260 million in tax relief to low-income residents, which means the middle class will be hit the hardest. It’s no wonder that Sen. Jack Brandenburg (R-Harrison) described the Governor’s 11th-hour plan as “complicated and convoluted.”

Under the Governor’s plan, the sales tax on gasoline and existing fuel taxes would be ditched for a new motor fuels tax that is dedicated strictly for the use of repairing Michigan roads. Such a reform, would double the state’s fuel tax, launching Michigan from number six to number one for highest fuel tax amongst all other fifty states. According to the data of the 2014 American Petroleum Institute, Michigan citizens pay 48.66 cents per gallon of gasoline towards taxes and 58.38 cents per gallon of diesel towards taxes. Yet the state government only spends $11.70 per lane mile on roads, sticking Michigan citizens with some of the highest costs and lowest gains in the country.

There is an alternative plan being introduced by House Speaker Jase Bolger (R-Marshall) that would gradually allocate sales taxes on gasoline to the transportation budget, shifting the funds from schools and local governments. This plan would also create $1.2 billion dollars for road funding like Synder’s plan but not punish taxpayers. Bolger believes that because the state’s economy is recovering and tax revenue is increasing, his proposal would not require any budget cuts and would instead just mitigate growth of future revenue.In a statement Bolger said “Simply put, this plan dedicates the taxes drivers pay at the pump to fixing their roads.”

Michigan is starting its fifth year of an economic expansion and recovery. After suffering one of the greatest population loses from the 2008 crash, why are lawmakers punishing those of us who remain in the state and giving others more reason to not move back to Michigan? According to Americans for Prosperity - Michigan’s State Director Scott Hagerstrom, “Lawmakers who support putting a massive tax hike on the ballot are just passing the ball so special interests can score a touchdown.”

Enough is enough. If Michigan wants to end the hemorrhaging amount of citizens leaving the state, wants to stop the slow economic recovery and enter the fast lane, then it needs to stop taking more money out of its residents’ wallets. Instead, the state government should let Michiganders decide how and where their money should be spent to afford more goods and services that they can spend on Michigan businesses. Ultimately, The final decision will be in the hands of Michigan voters, as the tax proposal will be on the ballot in May of 2015.