Of Tolerance and Tyranny 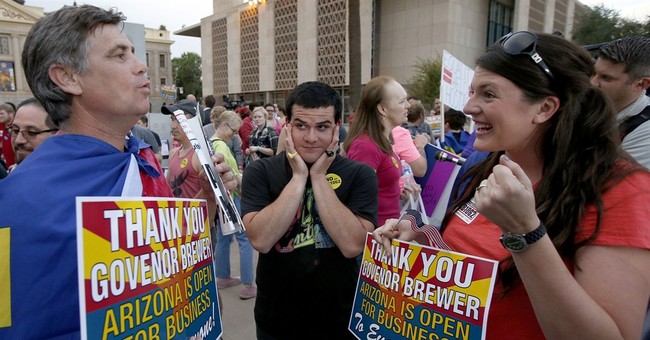 Brouhaha recently erupted over Arizona Senate Bill 1062—the bill that garnered national attention after being falsely maligned and derided as “anti-gay.” The two-page bill defined free exercise of religion as “practice or observance of religion, including the ability to act or refusal to act in a manner substantially motivated by a religious belief, whether or not the exercise is compulsory or central to a larger system of religious belief.” Simply put, the bill would have reaffirmed the 1993 Religious Freedom Restoration Act signed into law by former President Bill Clinton.

This doesn’t mean that people can “do whatever they want” – laws against murder would still trump religious human sacrifice – but it would prevent the government from forcing people to violate their religion if that can at all be avoided. Moreover, there’s no mention of sexual orientation (or any other class or category).

Conservative talk show host Tammy Bruce—who is a lesbian—criticized Brewer in a column for submitting to the radical gay Left’s bullying tactics:

It has been disgusting to watch supposed gay “leadership” drag young gays and lesbians through an indoctrination that insists that in order to have equality, you must force other people to do your will, make them betray who they are, and punish them if they offend you.

Attacks on religious liberty are real and shouldn’t go unnoticed.

From the Health and Human Services (HHS)’s contraception mandate to government coercion of private businesses, religious liberty is under assault. Four cases involving Elane Photography, Sweet Cakes by Melissa, Masterpiece Cakeshop, Arlene’s Flowers, to name a few, shed light on this problem. It’s rather ironic that proponents of “marriage equality” who demand complete separation of church and state (or elimination of religion from the public square altogether) want to force private businesses to partake in these weddings.

Interestingly enough, these activists praise freedom of association only when convenient for them. For example, “marriage equality” activists are lauding New Mexico Governor Susanna Martinez’s hair dresser for dropping her as a client over her opposition to the redefinition of marriage.

The question beckons: Can an Orthodox Jewish deli owner refuse to make bacon-wrapped shrimp appetizers for a Christian wedding? Shouldn’t a black bakery owner be able to deny service to a KKK member? If yes, then a Christian baker can refuse services for same-sex ceremonies. Freedom of association goes both ways.

Here’s a proposition for supporters of “marriage equality”: Don’t like a business? Become a patron of businesses that are politically neutral or agreeable with your views. Problem solved. Don't behave like a tyrant and shut down businesses over mere disagreement of views.

Undeniably the cause of “marriage equality” is a fully-fledged movement in this country thanks to pop culture, higher education, and Hollywood. Despite more support for the cause, Americans are still deeply divided over marriage. Nevertheless, those of us who oppose the redefinition of marriage shouldn’t grow dispirited.

Brandon Ambrosino of The Atlantic wrote a compelling column in December titled “Being Against Gay Marriage Doesn't Make You a Homophobe” calling on his fellow “marriage equality” supporters to be tolerant of opposing views:

Simply having reservations about gay marriage might be anti-gay marriage, but if the reservations are articulated in a respectful way, I see no reason to dismiss the person holding those reservations as anti-gay people. In other words, I think it’s quite possible for marriage-equality opponents to have flawed reasoning without necessarily having flawed character. When we hastily label our opposition with terms like “anti-gay,” we make an unwarranted leap from the first description to the second.

Tyranny in the name of tolerance leads to chaos and societal division. We must challenge our opponents to civil discourse and not resort to their petty behavior. Time will tell if the most devout supporters of “marriage equality” will practice tolerance and learn peaceably coexist with us.