Gabe Kaminsky
|
Posted: Jan 04, 2021 12:01 AM
Share   Tweet
The opinions expressed by columnists are their own and do not necessarily represent the views of Townhall.com. 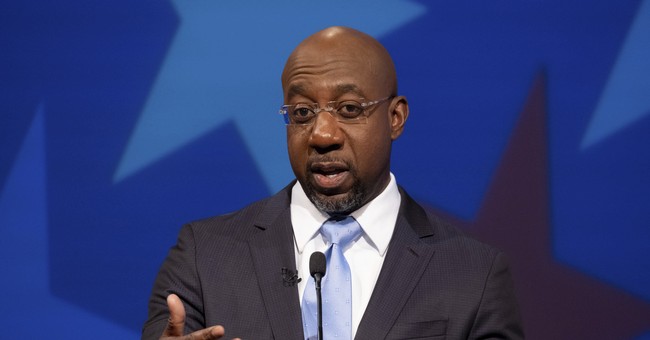 Flirting with Marxism and conflating Christian theology — Georgia candidate Raphael Warnock is a walking contradiction to be potentially elected to the United States Congress.

Raphael Warnock is a Marxist pastor. We can ascertain this contradicting truth from several things he has said through the years. Not barring his ambivalence to condemn the literal term in the Dec. 6 debate against Republican Sen. Kelly Loeffler — Warnock has said various anti-American things through the years, at both at his congregation Ebenezer Baptist Church, as well as to the press.

When prompted by CNN’s Jake Tapper on Nov. 15 about why it is understandable that Americans would see socialist Fidel Castro “as a murderous tyrant and not someone to be celebrated, Warnock dodged Tapper big time. It showed his values.

"I will tell you what I understand. “I understand why Kelly Loeffler is trying to change the subject . . . I have never met the Cuban dictator,” he said. And so I'm not connected to him."

One does not have to have “met” Marxist-Leninist inspired leader Fidel Castro to understand the bloodshed he caused on Cuban soil, and beyond. Do I have to have met Adolf Hitler — who killed my ancestors in Poland — to understand his malevolent rage for blood? Upon the Castro regime assuming control over the food industry, telecommunications, oil refineries, religious institutions — and outlawing free markets — Cuba’s GDP was halved and more than 11 million people starved. In The Black Book of Communism, it is estimated that in the 1960s alone, 30,000 people faced arrests and 7,000 to 10,000 (at a bare minimum) were executed. From the 50s to the late 90s, an estimated 15,000 to 18,000 were killed. For a population still under 11 million by 1997, this is exorbitant and vile.

Nonetheless, Raphael Warnock does not have the guts to call out evil when it is right in front of his eyes.

On the “Mission: Timpossible” podcast, Warnock asserted to host Tim Bryant that abortion — the fundamental killing of the unborn — is “consistent” with the Bible.

“I think that human agency and freedom is consistent with my view as a minister,” he told Bryant after being asked about whether the 1973 landmark case Roe v Wade violates the sanctity of human life.

According to the March for Life Action— Warnock supports taxpayer funding for abortion, opposes protecting babies born-alive after an abortion, supports taxpayer subsidies of Planned Parenthood, and opposes Georgia’s Heartbeat bill banning abortion after the six-week mark. These positions are mirrored by that of Jon Ossoff, another radical in his own right.

As I discussed in my column in the Christian Broadcasting Network, the Bible is not black and white on this issue. I would point “Rev.” Warnock to several scripture verses, and notably, Psalm 139:13-15; “For you formed my inward parts; you knitted me together in my mother’s womb. I praise you, for I am fearfully and wonderfully made. Wonderful are your works; my soul knows it very well. My frame was not hidden from you when I was being made in secret, intricately woven in the depts of the earth.”

Warnock runs his congregation like it is a political action committee. He is regularly partisan in his sermons, politicizing Jesus and the Bible. By treating his church like a breeding ground for all of his non-related and profoundly anti-Christian ideas, he disavows the meaning of worship in general. He insults the very people he speaks to.

In 2018, the “Rev.” bashed United States-Israeli affairs in his sermon and blatantly distorted facts about Palestine.

“It’s been a tough week. The administration opened up the US Embassy in Jerusalem. Standing there [were] the president’s family and a few mealy-mouthed evangelical preachers who are responsible for the mess that we found ourselves in, both there and here — misquoting and misinterpreting the Scripture, talking about peace. Meanwhile, young Palestinian sisters and brothers, who are struggling for their very lives, struggling for water and struggling for their human dignity, stood up in a non-violent protest, saying, ‘If we’re going to die, we’re going to die struggling.’”

“Yes, there may have been some folks who were violent,” referring to terrorism attacks on Israel and several arrests that proceeded the opening of the Embassy, “but we oughta know how that works out,” he said.

As The New York Post reported, Warnock effectively likened Palestinian citizens to the Black Lives Matter movement in their supposed righteousness— praising both for standing up and “having a peaceful demonstration.” Of course, it is indubitably confusing what he is referring to. Black Lives Matter and Antifa terrorized cities for nights on end this past summer. In their own right, Hamas and Palestine-affiliates are a perpetual menace in Israel who have terrorized Israel since waging war in 1987.

This is the sort of anti-Israel language that runs rampant in the Democratic party. If elected, Warnock will join the anti-Semitic ranks of “The Squad,” including newly elected Cori Bush and Jamaal Bowman. After all, it was Rep. Ilan Omar, a notable backer, and friend of Warnock, who in 2019, tweeted, “It’s all about the Benjamins baby,” after a House of Representatives resolution to condemn anti-Semitism and other forms of prejudice.

The above statements are only a select few of the sort of outlandish, irrefutably immoral from candidate Raphael Warnock.

I implore Republicans and Democrats both to vote for Rep. Kelly Loeffler on Jan. 6 in Georgia. If not for conservatism — for American values and freedom.

Gabe Kaminsky is a fellow in Family and Religious Liberty at The Heritage Foundation. Follow him on Twitter @Gabe__Kaminsky