Post-Schneiderman: The Perfect Storm for a GOP Victory in New York’s AG Race?

Fred Lucas
|
Posted: May 19, 2018 12:01 AM
Share   Tweet
The opinions expressed by columnists are their own and do not necessarily represent the views of Townhall.com. 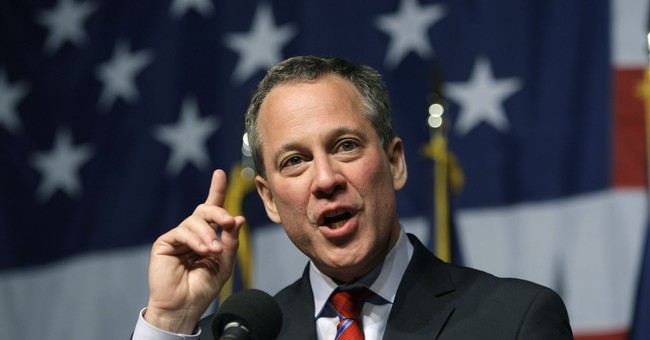 New York Attorney General Eric Schneiderman was the leader of the #Resistance legal strategy, focused seemingly more on litigating against President Donald Trump’s policies than representing the interest of his state.

He was using the job to build a national platform. And why not?

Two of the last three Democratic governors—Eliot Spitzer and Andrew Cuomo—were high profile attorneys general, using it as a springboard for bigger ambitions.

Schneiderman, after resigning last week in disgrace, will never reach those ambitions. Four women accused him of physical abuse. Schneiderman resigned just hours after the allegations he denied were made.

The massive scandal that represents much of what is wrong with Albany could present a massive opportunity for the Republican party in the state, as a candidate with a record of reform and fighting corruption has stepped forward.

Rockland County Attorney Thomas Humbach is seeking the state GOP’s nomination. The state party is holding a convention next week to endorse a candidate in a lead up to the state primaries held in September.

Humbach served as Rockland County Attorney in 2014, in the state’s third most populous county that is not part of New York City. The county is near the city, and so he has already had some of the major market media exposure.

As county attorney, Humbach recouped taxpayer money illegally paid to elected officials after taking legal actions. The officials were unlawfully paid for services on a county board. Most officials paid the money back and judgements were filed against officials who haven’t.

Since taking the job, Humbach slashed the amount of money paid to outside legal lawyers by 50 percent, saving county taxpayers about $650,000.

He tracked down inappropriate contracting practices and developed reforms to make county contracts subject to more oversight, which he said yielded $1 million in savings and revenue.

This could be the reputation needed to combat the rot in New York politics.

“When a New York State Attorney General, a person we look for to uphold the law fails so completely, it is clear that a new focus is necessary to make this state respected,” Humbach said in announcing his candidacy a day after Schneiderman resigned. He added, “What is needed in Albany today is a person with the clarity of purpose, and the understanding of government, that I will bring to the Office of Attorney General.”

There’s one other big reason for the GOP to be more hopeful about snatching the AG’s office in New York this November.

Former U.S. Attorney Preet Bharara is weighting an independent run for attorney general. Among the parties trying to woo him is the New York Reform Party.

The left actually loves Bharara. Trump fired him in early 2017, so he must be good, goes the reasoning among many progressive activists. However, Bharara prosecuted New York Assembly Speaker Sheldon Silver, a Democrat, for corruption charges. So, the state’s Democratic establishment won’t welcome him.

He could also offer the same “breath of fresh air” aura as Humbach going into the campaign. But, third party candidates rarely ever win. Bharara could, however, draw heavily from whoever the Democrats nominate to run in November.

For now, Humbach’s chief rival for the Republican nomination is Manny Alicandro, a corporate attorney from Manhattan. But the field could grow.

In the past, Republicans have had success winning governorships in blue states. But down ticket races have typically been out of reach. It’s different this time.

It’s still an uphill battle to be sure. But, a Democratic scandal that rocked the office, plus a divisive battle royal for the Democratic nomination, plus a (mostly) liberal third party candidate could equal the perfect storm for a reformer GOP candidate to take advantage of the mess.

Humbach could be the right candidate for the right time if he can seize the moment.