How Many House Republicans Does it Take to Change a Light Bulb? 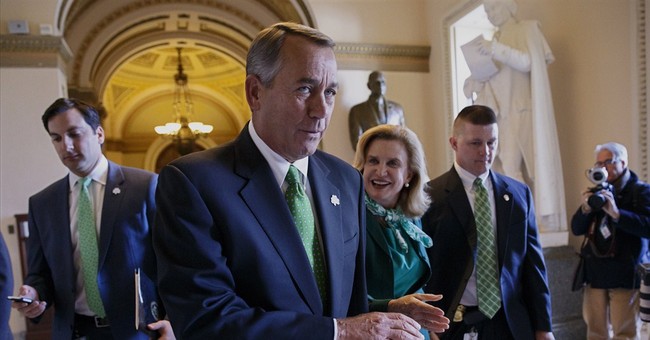 How many House Republicans does it take to change a light bulb?

It’s a trick question. They wouldn’t try. They prefer to just sit in the dark and complain that someone else isn’t changing it.

Their proclivity for trepidation and their ineptitude explains why, a-year-and-a-half after we suffered a brutal terrorist attack in Benghazi, Congress and the American people are still being kept in the dark about so many facts essential for grasping the truth and thereby learning the right lessons from this great national tragedy.

President Obama, Hillary Clinton and their fellow Democrats may not want the American people to learn the whole truth about Benghazi -- but it is not within their power to prevent this. Whereas it is absolutely within the power of House Republicans to make it happen -- but it is not happening.

Which means that the blame for our still being so deeply in the dark about Benghazi lies squarely with the House Republicans.

With the Obama Administration resorting to lies, deceptions and stonewalling to try to blur and block the truth about Benghazi, House Speaker John Boehner announced not long after the attack that he was fed up and was making it a “top priority” to get the truth out to the American people.

On December 4, 2012, Congressman Frank Wolf (R-VA) introduced a resolution to create a House Select Committee to investigate Benghazi, a select committee being generally regarded as the best approach for an intelligent, well-coordinated, bipartisan investigation. Unlike a standing committee which is certain to be constantly distracted by other matters impeding its effective use of time, resource and expertise, a select committee is able to focus its attention solely on one specific issue.

At the beginning Boehner said the right things and Wolf introduced the right approach. Yet so ineffectual are House Republicans that we still lack answers to most of the truly essential questions, including this, the most important one: What person or persons is responsible for the utter failure to pre-position US military assets within range to be supportive in the event of an attack; and what, if any, disciplinary action has been taken or is contemplated?

What is the explanation for why House Republicans have not been able to get to the bottom of Benghazi? In a nutshell: absence of any sound strategic thinking and lack of backbone, with special blame going to John Boehner and the rest of the House “leadership.”

All Speaker Boehner had to do was approve the obviously wise approach of establishing a single-focused select committee, the case for which regarding Benghazi was all the more compelling because an unusually large number of different committees could claim some bit of jurisdiction.

But those half dozen committee chairmen wished to be in on the action and bask in the limelight. Boehner was forced to choose between the wishes of some big egos and little fiefdoms and what was best for the country – and, being such a weak Speaker and scant thinker, Boehner opted to block the select committee, thereby guaranteeing an ill-coordinated, ill-focused, inadequate investigation.

Frank Wolf, to his credit, persisted, making a consistently intelligent, factual, thoughtful case for the select committee – and the number of House Republicans signing on as co-sponsors steadily increased. As that number neared two-thirds of the Republican membership, “leadership” aggressively discouraged others from joining in. And the momentum stopped -- for a while. But as constituents confronted them on the pathetic pace of the Benghazi investigations and demanded they support Wolf’s approach rather than Boehner’s, still more House Republicans signed-up as co-sponsors

Which brings us to where we are today: 190 of the 232 House Republicans are now on record co-sponsoring the Wolf resolution demanding the select committee. That’s 8 out of 10 House Republicans!

Frank Wolf is right when he says that “outside groups…deserve more credit than Congress” for uncovering crucial Benghazi details. True, despite Boehner’s willfully flawed approach House Republicans have uncovered some very good information on Benghazi – but nowhere remotely near what we should know a year-and-a-half after the attack.

Wolf is also right when he says “it is startling how little progress has been made in this investigation” and that “the lack of answers…is inexcusable.”

So what excuse can Frank Wolf and his 8 out of 10 House Republican co-sponsors possibly have for not being able to carry the day in the House Republican Conference and get the select committee at long last established and operating?

How can 82% of House Republicans unite on an issue the country needs and clearly supports and still manage to be the losing side within their own party membership? Only by not truly trying! The sad truth is that Wolf and the Gang of 190 House Republicans steadfastly refuse to do anything bolder than whine and wring their hands and meekly complain that someone else – President Obama or Speaker Boehner -- isn’t getting it done.

What they should have done long before now is confront Speaker Boehner both publicly and before the House Republican Conference and give Boehner this ultimatum: We will have the select committee that 82% House Republicans support and investigate Benghazi right – or we will have your resignation as Speaker.

If they don’t wise up and do this very soon the conservative movement, especially conservative media, should make a crusade of forcing House Republicans to do the right thing. We need to judge our elected representatives not just by what they do but also by what they fail to do.

Those four brave Americans murdered in Benghazi courageously confronted heavily armed terrorists. The least Frank Wolf and those 8 out of 10 House Republicans can do for them – and for their families – is have enough backbone to finally stand up to Speaker Boehner and force him to quit blocking the select committee.