Where Was The President -- And What Was He Doing? 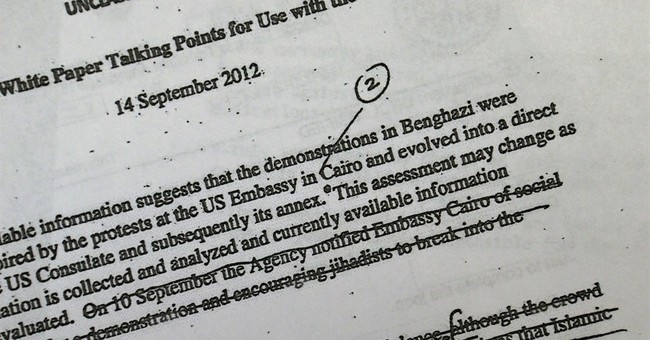 Forty years ago tomorrow, the ranking minority member on the US Senate’s select committee -- charged with investigating an incident in which five men had broken into the Democratic National Committee headquarters at Washington’s Watergate complex -- asked a question that would become one of the best known refrains in American political history:

“What did the President know -- and when did he know it?”

Senator Howard Baker of Tennessee was a Republican serving on a Democratic-controlled congressional committee investigating a Republican president -- and that memorable question he asked was manifestly a genuine effort to seek the truth about Watergate.

What a contrast between back then and right now!

Does anyone believe that any ranking Democrat -- or any other Democrat on a congressional committee investigating Benghazi -- has demonstrated Howard Baker-like honesty and integrity by making getting to the truth the main goal instead of trying to provide additional cover for the attempted cover-up?

And speaking of contrast: That 40-years-ago breaking-and-entering scandal dominated the nation’s newspapers and news magazines. CBS, NBC and ABC covered the congressional hearings on it fully -- at first simultaneously, then on a rotating basis, and PBS re-broadcasted them at night. NPR broadcasted the audio start-to-finish every day. Compare that with the way the media reacted to Benghazi, where a US Ambassador and three other Americans were murdered and other Americans seriously injured by al-Qaeda-linked terrorists.

Clearly Benghazi is a major scandal, more serious and more complex than Watergate, with a far wider scope and with profound implications for national security. Americans under siege for hours were abandoned by their country and told to forget about the world’s greatest military power making any real attempt to come to their rescue. And shortly before that, they had been told to forget about their repeated pleas not to withdraw a small security force they considered essential for their safety.

Yet it took months before most of the media finally asked questions they should have focused on right from the start. At first, and until well past Election Day, most newspapers relegated questions about the Administration’s handling of Benghazi to minor examination at best. Only one major broadcast news network -- Fox -- treated Benghazi as the significant news story it is.

“Where exactly was the President of the United States throughout the roughly eight hours of the Benghazi attack -- and what exactly did he do, if anything, to try to help the Americans serving our country in that dangerous spot while they were being killed and injured by terrorists?”

We know that around 5PM Washington time on the evening of the Benghazi attack, President Obama was in the White House attending a previously scheduled meeting with his Secretary of Defense and the Chairman of the Joint Chiefs of Staff when they first discussed the attack.

We know that about five hours later, he discussed the matter with Secretary of State Hillary Clinton, shortly after which she released a statement strongly suggesting cause-and-effect between “inflammatory material posted on the Internet” and the attack.

We know that at no other time during that terrible night did the President discuss it with the Secretary of Defense, the Chairman of the Joint Chiefs of Staff, the Secretary of State, or the Director of the CIA.

If it’s public knowledge that he spoke with Secretary Clinton and at what time he did so and that he did not talk with her or these other three major players again that night after his earlier around 5PM discussion with two of them, why in the world does the Obama Administration insist on making such a big secret of where he was and what he was up to during the long duration of the attack?

Such secrecy invites all sorts of suspicion and speculation. It makes Obama look like a captain jumping ship.

Recently, top White House advisor and Obama campaign strategist David Plouffe said it was “irrelevant” to ask where the President was and what he was doing the night of the attack and that it was “offensive” for journalist Chris Wallace to even ask.

If he does, he needs to explain why.

If he doesn’t, he needs to end the mystery.

The whereabouts of the President of the United States throughout an attack upon us is not something that should be kept secret from the American people.

It makes no sense that, rather erase the worst possible suspicions by answering such a simple and sensible question, the Obama Administration is willing to let linger the appearance that when America came under attack, the President went AWOL.

But, then, so little of anything that the Obama Administration has said or done regarding Benghazi makes sense.