Frank Pavone
|
Posted: Mar 07, 2017 12:01 AM
Share   Tweet
The opinions expressed by columnists are their own and do not necessarily represent the views of Townhall.com. 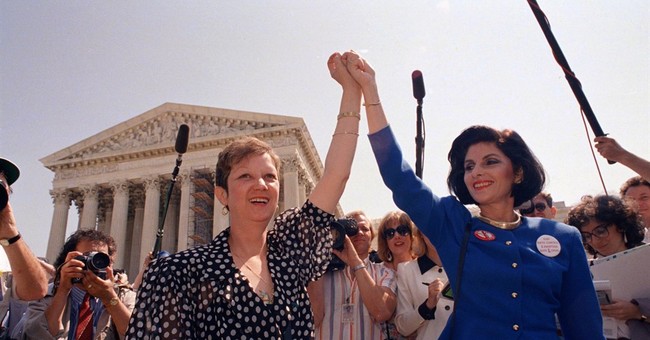 “The stakes have been high in previous elections.  But in 2016, the stakes can be measured in human lives….”

How right the Democrats were in declaring that the stakes in the 2016 election could be measured in human lives.  How wrong they were in making their measurement.

That’s because the Democrats consciously omitted the unborn from their calculations.  And given their recent choices of former Obama cabinet member Tom Perez and leftist Congressman Keith Ellison to lead their party, they have no intention to relent in their efforts to dehumanize the most helpless among us.

Simply stated, fewer babies would have lived to see the light of day over the next four years had Democrats won the presidency and Congress.  And given the new leadership team of Perez and Ellison, both supported by lockstep pro-aborts, the party’s anti-life mindset is not about to change without grassroots pressure.

The unfortunate fact is that the one time “party of the little guy” simply doesn’t care about the littlest in society.  The political organization that proclaims itself the champion of the vulnerable and defenseless has no room in its collective heart for the tiniest and most voiceless.

And yet, immersed in self-deception, Democrats claim to care about the least among us.

How did this happen?  Why does it continue?

Certainly, the Democratic Party’s Platform is full of noble intentions.  The words that seemingly would support protecting unborn babies’ lives are inscribed in that document.  Those words, however, become lost in translation when passed through the abortion industry filter that governs the party’s speech.

Take away a child's right to life by abortion and you have taken away her right to health care, to an education, to work, to vote -- and every other right. Put another way, supporting abortion says that all these other rights belong to some human beings, but not to all.

Indeed, what’s inclusive about saying that it’s OK for certain humans to be poisoned, dismembered, or decapitated?

It’s that kind of “inclusiveness” that has caused one-time supporters to flee the Democratic Party.  But Democratic politicians don’t see – or at least won’t acknowledge – the logical disconnect between their rhetoric and the reality of their pro-abortion position.

There have been three abortion-related votes in the House of Representatives so far this year.  One to bring to the House floor for consideration the No Taxpayer Funding for Abortion Act, one to pass that bill, and one to disapprove a federal regulation issued in December by the Obama administration that, in effect, requires states to give taxpayer money to Planned Parenthood and other abortion businesses.

In those three votes, out of 193 Democratic Representatives, onlytwovoted pro-life in every instance.  One additional Democrat voted pro-life one out of those three times.  The other 190 supported the use of taxpayer money for abortions and abortionists.

The Senate is no better.  While there are three Democratic Senators who call themselves “pro-life,” in the last Congress two of them voted pro-life only 25 percent of the time and the other voted pro-life 75 percent of the time.  Out of the 46 Senators who caucused with the Democratic Party in the last two years,nonevoted consistently pro-life.  Forty-three of them voted pro-abortion in each and every instance.

It didn’t used to be this way.

Kristin Day, Executive Director of Democrats for Life of America, said last year just before herparty adopted its most pro-abortion platform ever, “Back 30 years ago, one’s position on abortion did not determine if you were a Democrat or a Republican.”  Today, it pretty much does.

The Democratic Party doesn’t just fail to consider the unborn, it excludes voters who do.  And many of those voters would normally call the party their political home.

A Marist Poll released in January found that 23 percent of grassroots Democrats identify themselves as “pro-life.”  Of those, 48 percent consider themselves “strongly pro-life.”  Most tellingly, only 28 percent of Democrats agree with their party’s position on abortion – that it should be available on demand through all nine months of pregnancy.

And those are the numberstoday.  Pollster John Zogby found in 2003 that 43 percent of Democrats agreed with the statement that abortion “destroys a human life and is manslaughter.”

Looking at election returns, it’s not hard to see what has happened to the pro-life Democrat voter.  He or she has either switched parties, stayed home,or cast ballots for Republicans.  In the last eight years, Democrats have lost about 1,000 federal, state, and local offices that they once held.

The question remains, why has the Democratic Party morphed into an extreme pro-abortion organization with no toleration for dissent?

Ms. Day states, “The abortion lobby is vicious, and applies tremendous pressure on Democrats to conform to one way of thinking on abortion.”

Indeed, Planned Parenthood, which aborts 320,000 unborn children a year, has become almost an arm of the Democratic Party.  The abortion giant spent over $38 million between 2012 and 2016 to elect Democrats or defeat Republicans.  In return, Planned Parenthood receives over $500 million in public funds.

Money, then, is a big reason for the abortion industry’s seizure of the Democratic Party.  But, ultimately, we don’t count money on Election Day, we count votes.  Let’s remember that Hillary Clinton outspent Donald Trump by almost two to one last year.

It’s time, then, for pro-life Democrats to hold their party accountable to its rhetoric.  Democratic leaders can’t talk about human rights on the one hand, while dismissing the most fundamental human right on the other.  Not if they ever want to be in power again.