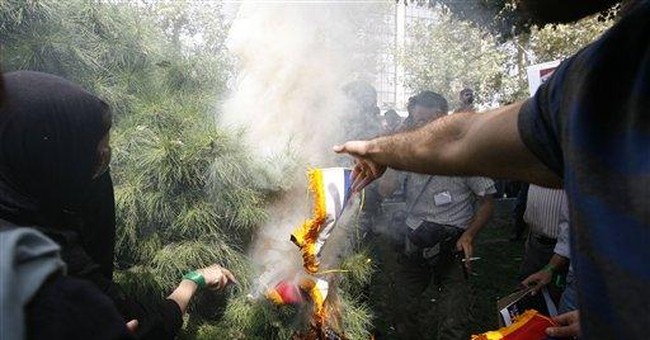 Last March, during a visit to Moscow, Secretary of State Hillary Clinton was made to look foolish when she presented her host, Russian Foreign Minister Sergei Lavrov, with a box festooned with a button marked "Reset" in English. The idea was to have a photo-op designed to symbolize President Obama's ambition to put U.S. relations with the Kremlin on a new, more positive footing after the bilateral strains of the George W. Bush years.

Unfortunately for the Secretary, her crack State Department team mistranslated the term and the word on the box in Russian meant "overcharge" not "reset." Based on the President's decision announced to scrap the planned deployment of a missile defense system in Poland and the Czech Republic, however, we now know, that Team Obama's version of resetting would best be translated as "capitulation."

Mr. Obama came to office evincing the reflexive hostility of many partisan Democrats to the idea of anti-missile protection for the United States. This bizarre, not to say dangerous, attitude has its roots in the theology of the Cold War during which the Left embraced arms control in general and, above all, the 1972 Anti-Ballistic Missile Treaty. In practice, that accord precluded the United States from deploying any missile defense of its territory - a state of grace Democratic legislators and operatives were horrified to see President Bush abandon in December 2001 with the formal abrogation of the ABM Treaty and the subsequent installation of interceptors and radars at two sites, one in Alaska and the other in California.

In addition, to enhance the protection of American territory and to provide at least a modest defense of Europe against the growing threat of ballistic missile attack, Mr. Bush proposed a so-called "Third Site" in Eastern Europe. The Polish and Czech governments saw this collaborative effort as a means not only of contributing to their own security and that of their NATO allies (who voted twice unanimously for the Third Site) against Iranian missiles. These key post-Cold War allies also saw it as a tangible expression of the U.S. commitment to their security in the face of assiduous Russian efforts to reassert a sphere of influence that would turn the clock back, reestablishing in some form their unhappy status under the Kremlin's thumb.

It was precisely in the interests of advancing that ambition that the Russians assiduously opposed the deployment of the Third Site. They absurdly claimed the ten interceptors in Poland would threaten the deterrent power of the many hundreds of nuclear warheads they could rain down on Europe. Vladimir Putin even threatened thermonuclear attacks on the Poles and Czechs if they did not abandon the NATO-agreed plan.

Despite efforts by the then-Bush administration Defense Secretary Robert Gates and his Foggy Bottom counterpart, Condoleezza Rice, to try to find some programmatic accommodation with the Russians, in the end President Bush stood firm. And fierce opposition in certain quarters domestically did not preclude the Polish and Czech governments from doing the same.

Today, however, President Obama pulled the plug on the Bush Third Site. Although he professed an abiding commitment to the security of Poland and the Czech Republic and pledged "a new missile defense architecture in Europe will provide stronger, smarter, and swifter defenses of American forces and America's allies," no one should be under any illusion: With his capitulation to Russia, Barack Obama has just affirmed what I call the Obama Doctrine: Undermining our friends, emboldening our enemies and diminishing our country.

The claim made by the President and Bob Gates, still serving as the Pentagon chief, that revisions in the U.S. intelligence assessments justifies cancelling the Third Site is preposterous. Even if it were true that Iran's longer-range missiles are coming along more slowly than had previously been anticipated (which seems unlikely, given the intelligence community's past, politicized and erroneous judgments about Iranian weapons programs), no one should assume that such missiles will not be deployed and threaten our allies and us in due course. The idea that we would eliminate now our capability to deal with them down the road is transparently a political decision, not a national security-minded one.

The true nature of that political decision is also clear: Team Obama believes that by cancelling missile defenses we absolutely will need in the future and leaving our allies in the lurch, the United States will secure assistance from the Russians in minimizing the Iranian threat. There is, sadly, no reason to believe that such help will be forthcoming.

To the contrary, all the evidence suggests otherwise: Vladimir Putin is enabling that Iranian threat, with nuclear technology, anti-aircraft defenses and political protection against any effective international sanctions on Tehran. Worse yet, he has now been rewarded for such behavior by an act of naked appeasement with respect to the Third Site.

These strategically tectonic shifts will have far-reaching, if not entirely predictable, consequences. The U.S. deployment of additional sea-based defenses and ultimately the placing more ashore somewhere may help mitigate some of the near-term missile threats Iran is now posing to our allies and forces in the Mideast. But it is a safe bet that they will not begin to offset the damage that the Obama administration has done to our own security and to our relations with key allies worldwide by resetting" relations with Russia in a manner that amounts to rank capitulation.