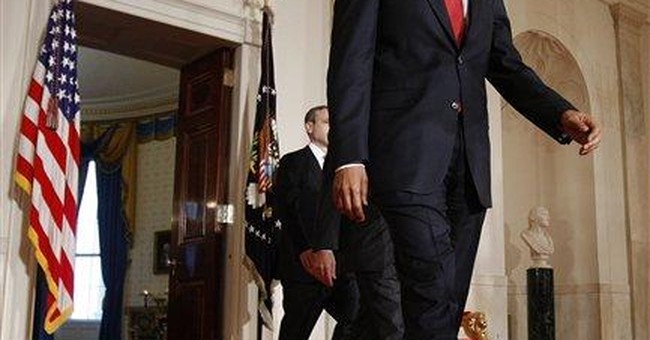 At one point or another, everybody tries to justify their participation in behavior that defies common sense and good judgment by claiming that someone else, usually older and putatively smarter, told them to do it. Often someone genuinely smarter and typically older – a teacher, a parent, a coach – responds with something to the effect that, “If Johnny told you to jump off a bridge, would you do it?”

Generally, the answer is the commonsensical “No.” Yet now, a gaggle of Johnnys – notably former Clinton Defense Secretary William Perry and other worthies who should know better – are telling the American people that it is safe and responsible to do the national equivalent of jumping off a bridge. They contend that the United States can prudently get rid of most of our nuclear arsenal, enroute to what they say is a desirable end-state: a “nuclear-free” world.

For a sense of how surreal this recommendation is, consider the prospect that Pakistan’s virulent Taliban may be within weeks of joining the nuclear “club” by taking over the country and its arsenal. Does anyone really think that these Shariah-espousing Islamists, to say nothing of the Russians, Chinese, North Koreans, Iranians, will actually go “nuclear free”?

Worse yet, the “smart people” who espouse denuclearization either explicitly embrace another radical idea – or implicitly give political cover to those who do: the notion that we can allow the continuing, and inexorable, deterioration of what is left of our nuclear stockpile and the human and physical infrastructure required to maintain it.

To be sure, many of those, including President Obama, who favor “Global Zero” assure us that it will take many years to achieve. Until then, Dr. Perry and others blithely aver that our nuclear arsenal must be kept safe and reliable. The logic of the denuclearizers’ bridge-jump proposal, and certainly its practical effect, however, is the opposite: to discourage the investment needed to maintain the U.S. arsenal, to say nothing of any development, testing or deployment of new weapons.

In fairness to Bill Perry and his chief collaborators – former Secretaries of State Henry Kissinger and George Shultz, former Senate Armed Services Committee Chairman Sam Nunn and, most recently, former National Security Advisor Brent Scowcroft – their defiance of common sense is more the norm among the high priesthood of nuclear disarmers. This is an elite that has, since the dawn of the nuclear age, been populated by by some of the highest IQs in America. Yet, that community has consistently generated some of the most hare-brained, common sense-defying theories and policy initiatives known to man.

Take for example, one of this priesthood’s holiest of holies – the 1972 Anti-Ballistic Missile (ABM) Treaty. This accord, rooted in the preposterous proposition that America would be most safe when it had no effective defense against Soviet ballistic missiles, was one of Henry Kissinger’s most prized achievements. Until, that is, even he and the man who signed the treaty for the United States, Richard Nixon, publicly acknowledged in the 1990s that such deliberate vulnerability made no sense in the post-Cold War world with its proliferating missiles and nuclear programs.

Today, the octogenarian Johnny Kissinger is evidently not content with his reckless legitimation of the denuclearization of the United States. He is busily negotiating with the Russians a new arms control that reflects the mutual desire of the Kremlin and the Obama administration to reestablish restrictions on U.S. missile defenses.

Another bit of lunacy favored by the denuclearizers of the 1980s was the “nuclear freeze.” Their idea was to stop all modernization of nuclear forces, underground testing and upgrades to the weapons “complex” that supports both. President Reagan rightly rejected this proposal, knowing full well that it would, as a practical matter, wind up applying to this country alone.

Unfortunately, since 1992, that is pretty much what has happened here. Today, in the words of Obama Defense Secretary Robert Gates, the United States is “the only declared nuclear power that is neither modernizing its nuclear arsenal nor has the capability to produce a new nuclear warhead.”

Not content with the slow demise of America’s deterrent, the denuclearizing Johnnys are making a new push for another arms control initiative – one wisely rejected by a majority of the U.S. Senate a decade ago: the Comprehensive Test Ban Treaty (CTBT). Ratification would effectively preclude the United States from ever validating its nuclear arsenal via the only tried-and-true means: actual explosive detonations. Even now, thanks to the unilateral U.S. moratorium on such testing adopted in 1992, there are grave and growing uncertainties about the reliability of our obsolescing weaponry.

Brent Scowcroft recently co-chaired with the ubiquitous Dr. Perry a Council on Foreign Relations panel promoting the nuclear bridge-jump. Published reports indicate that at least some of the members of yet another group which Secretary Perry also chaired – an official commission charged with reviewing the U.S. Strategic Forces Posture – will this week join the Council in endorsing CTBT’s ratification. Gen. Scowcroft has told the press he is “cautiously optimistic” 67 votes can be found in the Senate for the Treaty.

Will America jump off a bridge because these “smart people” say to? Or will we recognize that a world in which, among a growing number of others, the marauding Taliban in Pakistan might soon have nuclear weapons is not one in which the United States can safely heed such advice by continuing its denuclearization?