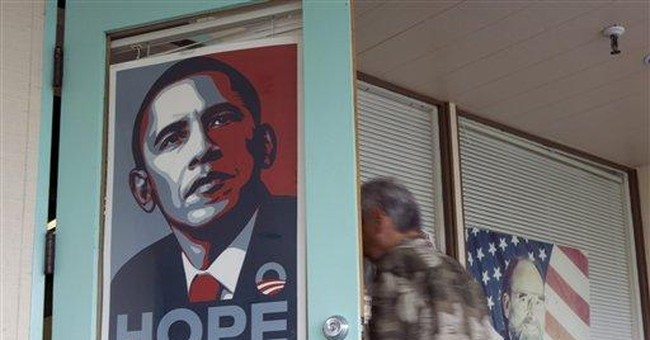 Nobody is grinning wider about Barack Obama’s lead in the polls than big union bosses. This election is their best shot in a half-century to make over Washington. If they can capture the White House, the House of Representatives, and produce a filibuster-proof Senate, they are looking at the biggest rewrite of labor law in modern history.

If this happens, The Wall Street Journal says, it “could lead to higher payroll and health costs for companies already being hurt by rising fuel and commodities costs and the tough economic climate.” In turn, all prices go up for you, too.

To understand the excitement Obama creates for Big Labor, you need to look back at his early days in Chicago, because it was in organizing that Obama began his foray into politics.

Obama’s arrival in Chicago in June 1985, to work with the Developing Communities Project on Chicago’s South Side, became a pivotal and eye-opening experience. He was tossed right away into neighborhoods where crushing poverty, raging violence, a cornucopia of drugs and homicidal crime were endemic.

At this time, Obama’s mentors schooled him in the Alinsky method, named for the radical socialist Saul Alinsky. He believed in agitating people so intensely, making them so angry about their rotten lives that they “rub raw the sores of discontent” and take action to change their lives. Alinsky’s book, titled “Rules for Radicals,” became the lodestar for Obama’s approach to politics.

As Obama wrote in his memoirs: “Change won’t come from the top…Change will come from mobilized grass roots. That’s what I’ll do. I’ll organize black folks… For change.”

For the unions, Obama has been a long time in coming.

Union bosses are well aware that their days were numbered until Obama came along. And they are sparing no expense in getting him elected.

The AFL-CIO and its affiliates have raised an unprecedented $250 million to put 200,000 union workers on the street campaigning for Obama in the crucial final weeks. The National Education Association has budgeted up to $50 million. The Service Employees International Union has added $100 million to pay 2,000 union members to leave their jobs and go work on Democratic campaigns. All totaled, unions are expected to spend more than $1 billion of their members’ money on the 2008 elections. Moreover, it’s not only money; many unions, including the mighty Teamsters, have given Obama their endorsements.

As Pete DuPont has written, if Obama is elected in November, “Significant labor law changes will likely start with the elimination of secret ballots for union organizing elections, so that unions can verbally "ask" workers if they would like to join (read: intimidate them into saying yes). Then may come repeal of the 1947 Taft-Hartley Act provision that allows states to enact "right to work" laws -- 22 of them have done so -- that allow workers to take jobs even if they decide not to join a union.”

Sen. Obama co-sponsored the legislation to which DuPont referrers, known as the Employee Free Choice Act or “card check.” This would make it much easier for unions to add new members by replacing secret ballots with cards that union organizers demand co-workers to sign. Obama has said several times he will sign it into law if elected.

Then there is the Teamsters Union. They claim they are not as corrupt as they used to be, and therefore should not have the Feds watch their every move. In March 2008, they were able to extract a promise from Obama to turn down the heat. He released this statement: “It’s time for the Justice Department to begin negotiations with the Teamsters regarding the elimination of the IRB (Independent Review Board, which investigates and punishes corruption)…”

This is only one of many promises he made to this special interest group -- promises he will be hard-pressed to renege on. That’s why union bosses are doing everything they can to get Obama elected. Not only will workers be coerced into paying union dues, but also a President Obama will make it much more difficult for businesses to survive, and the economy will suffer.