Eric Rozenman
|
Posted: Mar 20, 2021 12:01 AM
Share   Tweet
The opinions expressed by columnists are their own and do not necessarily represent the views of Townhall.com. 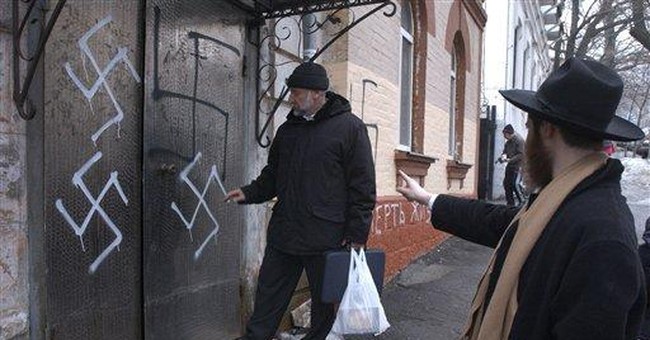 Accusations of “racist” are the ultimate malediction in the Church of Woke Progressivism. Racists commit “hate crimes,” so the secular fundamentalist catechism goes, and such offenses require extra punishment.

Sometimes the devil isn’t just in the details; he’s in the concept itself. So it is with the hate crimes classification.

Since the 1960s, civil rights groups have supported hate crimes legislation. Some of these laws increase prison time and/or fines for assaults motivated by the perceived religious, racial, national origin or sexual identity of the victim.

In other words, otherwise identical assaults differ and some victims are more victimized than others. George Orwell’s Animal Farm, prescient again.

In a staff meeting in the late 1990s, a few of us at B’nai B’rith, the venerable Jewish humanitarian and human rights organization, objected to joining a push for new hate crimes legislation. We argued that assault is assault, regardless of cause. Punish the deed, not the thought.

We failed. How could B’nai B’rith, founded in 1843 to help Jewish immigrants in the United States and fight antisemitism internationally, not support statutory recognition of and additional punishment for the kind of hate-fueled attacks inflicted on Jews individually and en mass for centuries?

Or so we believed until the Internet emerged as not only an information superhighway but also a sewer system of rumor, superstition and conspiracy theories. Digitization enabled outrage mobs demanding censorship via Big Tech, on campus and in news and entertainment industries.

But unless expression is likely to lead directly to crime, it’s constitutionally protected. If someone assaults me, I care less why he or she did so—to rob me or to disrupt my microscopic role in what they imagine to be the international Zionist conspiracy—and more that he gets what’s coming to him. Punish the illegal act, not the thought. Otherwise, for example, Jimmy Carter—who long ago confessed to “lust in my heart”—might have been a convicted “conceptual rapist,” not president.

Bad as the potential is for hate crimes codes to open the door to censorship, worse is their function as grease on the slippery slope of indoctrination. Examples, big and small, abound. Here’s one:

Viewers of a late-season college basketball game between Butler and Creighton universities—perennial March Madness hopefuls—likely noticed a screen-filling close-up of a black T-shirt with white letters in the style of the Black Lives Matter logo. It asserted “Racism Never Ends!”

It doesn’t? Then hate crimes bills, regulations, speech codes and social conventions must multiply endlessly. How else to fight an enemy not only insidious but also shape-shifting, often unconscious and whose wondrously malleable definitions always cover the latest target?

Can’t objectively prove “systemic racism?” Then cancel objectivity and move on to “structural racism.” And if structural racism remains inexactly quantifiable, use “disparate impact” or certainly “implicit racism.” If racism never ends, then no offense is unintentional—at least not subconsciously. Even more, differences between whites and non-whites must result primarily from lingering or disguised white racism.

Therefore, no whites condemned as racists in the virtual tumbrels en route to digital guillotines can be innocent. Blacks aboard must be Uncle Toms.

In medieval Europe Jews were massacred as demonic agents of Satan. In 1690s Salem, Mass., those convicted of consorting with the Devil as witches were hanged. We’ve made a lot of progress; today we don’t execute “the other” as demons or witches, we merely silence them as racists when they dissent from woke progressivism. You may hate it, but they’ll tell you it’s not a crime.

Eric Rozenman is a Washington, D.C. writer and a former editor of B’nai B’rith’s International Jewish Monthly magazine. Any opinions expressed above are solely his own.