Erick Erickson
|
Posted: Apr 13, 2018 12:01 AM
Share   Tweet
The opinions expressed by columnists are their own and do not necessarily represent the views of Townhall.com. 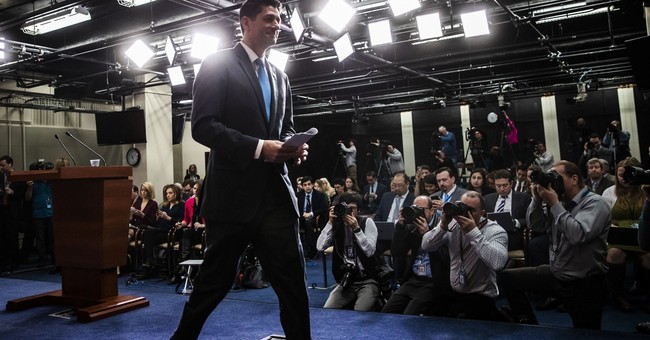 I spent the better part of this week in Washington, DC, including Wednesday, the day Paul Ryan announced he would not seek re-election. It has been expected. He has not been happy for a while. Let me make one point that too few reporters have made about Paul Ryan.

The Speaker of the House is 48 years old. He is older than his dad was when his dad died. In fact, the Speaker's father and grandfather both died at ages younger than the Speaker. He has the opportunity to have relationships with his children in ways he never got to have with his father. His family is in Wisconsin and he is missing out on a life he was not sure he would ever get to have.

To say that Paul Ryan is leaving Washington before the Democratic wave washes him away is wrong. He was going to leave anyway. Paul Ryan has been a driven man. Facing family genetics and a ticking age clock, he has been in a race to get things done. But the thing he has most wanted to do and believes is most necessary, entitlement reform, is not going to get done. Ryan successfully got Republicans to grab hold of the so-called "third rail" of American politics and vote to reform entitlements. They did. Barack Obama vetoed it. But the GOP did not get wiped out in the process. Ryan's work makes it possible in the future. But it is not a future on the horizon with Donald Trump as president. So there is no point in him staying.

Two weeks ago, Wisconsin had an election for the Wisconsin Supreme Court. The liberal judge backed by Democrats won. But the conservative alternative won Paul Ryan's congressional district. That paved the way for Ryan to know he could most assuredly leave and not see his seat fall to the Democrats.

Having said all that, we should not ignore that if Ryan were to stay he would find himself leading a Republican minority against possible impeachment. The Democratic wave is real and about the only thing that could stop it is the Democrats snatching defeat from the jaws of victory. That, however, is something only Republicans tend to do.

Republicans in Washington are fretting about the extent of the coming wave. Their thought process right now is that the House is gone and they will lose some Republican seats no one expects to lose. They think, for now, that they can hold the Senate, though barely. They might pick up a seat in the Senate, but each passing day sees Republican confidence in holding the Senate shrink. The GOP will also see a wipe out at the state level.

The GOP will have to be on its "A" game in every race at every level in every state to navigate the tsunami. There is a bit of irony here that the GOP gained so much in the past eight years and will watch much of it crumble away as it controls everything and accomplishes nothing.

Paul Ryan was going to leave anyway. What was not going to happen, though, was a record number of other departures. The rats are fleeing a sinking ship. They know what is coming and no amount of denial can forestall it. The president got saved by an Electoral College. He still lost the popular vote and that popular vote is what the GOP will have to rely on now.

Certainly, there are bad polls. But perhaps one of the worst is that which shows the president's popularity at 50 percent. The polling average of vastly more credible polls has him hovering in the low 40s. It seems if the economy were worse off, the president would be even less popular. Because of his trade war, that might just happen. The only saving grace for the GOP is that there is no permanent political majority. They will have another chance in the future.