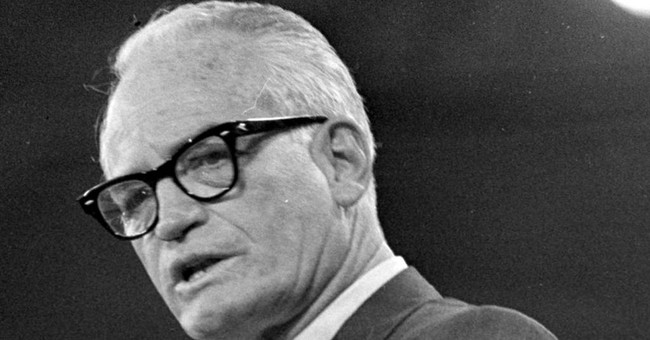 For the record, Barry Goldwater was not going to win in 1964 and it had nothing to do with his conservatism. The election came less than a year after Lee Harvey Oswald assassinated John F. Kennedy. In the 1960 election, Kennedy had barely beaten Richard Nixon. By 1964, pollsters struggled to find Americans who were willing to admit they had voted against Kennedy. In November of 1964, Americans were not going to throw out of office the man who was sworn in as President on Air Force One with Jacqueline Kennedy beside him and John Kennedy's body in a coffin in the back of the plane.

The media and Republican thought leaders, however, would tell you conservatives cannot win because Barry Goldwater's loss showed the nation will not go for an unabashed conservative. This is not the first time they did this.

As early as Jan. 29, 1979, in an article by Peter Goldman and Eleanor Clift in Newsweek entitled "The Politics of Austerity," the authors noted the Democrats' "winter-book bet for the Republican nomination is Ronald Reagan, and they consider him beatable, so long as Carter monopolizes the center."

On June 23, 1979, Barry Sussman in the Washington Post wrote, "Reagan has not picked up substantial support from party activists who represent either strong moderate or small liberal elements of the party, the poll indicates. Many appear to be concerned about some of Reagan's followers -- 'arch-conservative kooks,' one poll respondent called them."

"Is defeat probable for GOP if Reagan wins nomination?" blared the headline of the Christian Science Monitor on March 5, 1980, as it became obvious Ronald Reagan would be the Republican nominee. The newspaper had several overwrought "analyses" on just how vulnerable Ronald Reagan was as a far right extremist.

Five days later, Newsweek's Dennis A. Williams penned "The GOP's Hamlet". In his piece, Williams wrote, "GOP centrists -- [Gerald] Ford among them -- saw in Reagan's resurgence the potential for another Goldwater debacle. Ford, by contrast, was an ideologically safe, fondly remembered party loyalist who very nearly beat Jimmy Carter in 1976." In fact, Republican moderates were begging Gerald Ford to get into the Republican race. When he refused, they turned to Senators Howard Baker and Bob Dole, along with former CIA Director and Ambassador George H. W. Bush.

The media and establishment Republicans have a perpetual fantasy that conservatives cannot win elections, and they repeatedly cite Barry Goldwater as their example while ignoring two other bits of information. First, Ronald Reagan ran as a conservative in 1980 and did win. Second, the Establishment's picks of Bob Dole, John McCain, and Mitt Romney all lost. Even George H. W. Bush lost his re-election in 1992 when he ran as his own man instead of the continuation of Ronald Reagan's Presidency.

The problem both the media and the Establishment in Washington have is that they, like other people, only relate to those who look and sound like them. The conservatives on the campaign trail sound a lot like American voters right now. They gravitate to the issues Americans are concerned about. They talk about the issues like more and more Americans talk to each other about those issues.

In Washington, they do not talk about those issues or talk in those ways. They find it distasteful. As a result, they look at men like Ted Cruz and find him unlikeable, while polls show the electorate finds him likable and Washington neither likable nor relatable. Charles de Gaulle once said that Paris was not really France. Washington is also not America. The values and institutions are different, and presently Washington relates less and less to the American people.

Barry Goldwater was not going to win in 1964, but this year it seems voters want to make sure Washington will not win, which means a Goldwater probably can.