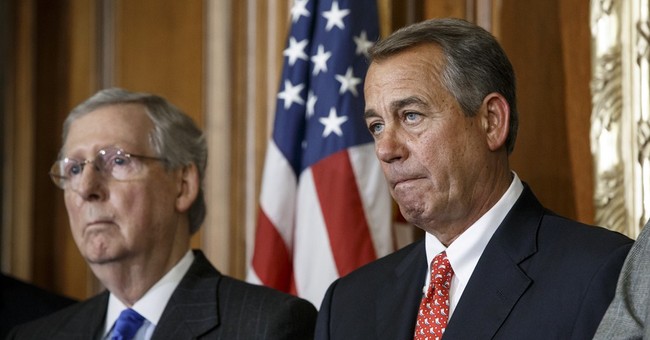 Republican Leaders in Washington, D.C. told the public they would stand up to Barack Obama's executive amnesty plan. They said they would stop him. "Trust us," they said. They concocted a plan to fund the government, but stopped funding the Department of Homeland Security at the end of February.

Having taken a hostage they never had any intention of keeping, Republicans last week watched Senate Majority Leader Mitch McConnell cave spectacularly. McConnell's friends call him Darth Vader. It is fitting considering Darth Vader lost the Death Star twice to a rag-tag group of rebels. They, of course, mean that McConnell is some sort of master people fear. No one fears Mitch McConnell. It can only be a matter of time that he takes up Bob Dole's old role as the Viagra spokesman.

At the annual Conservative Political Action Conference, neither Mitch McConnell nor Speaker John Boehner addressed the crowd. They were not invited. McConnell, seeking conservative legitimacy in his last re-election campaign, showed up at CPAC waving a gun in the air claiming he would stand up for the second amendment. A year later, President Obama is shutting down the production of bullets via executive order and McConnell is nowhere to be seen.

Gov. Bobby Jindal of Louisiana called out the feckless leadership of House and Senate Republicans. The crowd at CPAC embraced his rhetoric. There may never have been a love affair between the Republican leadership in Washington and the Republican base, but more and more there is an open feud.

It is not just amnesty. Last week the House of Representatives, in a tone-deaf mood, proceeded with reauthorization of No Child Left Behind, President Bush's education plan that he let the late Sen. Edward Kennedy author. Conservatives and Republicans in general have long agitated against the legislation, but Republican leaders are intent on pushing it through Congress. They went so far as to shut out conservative amendments to fix the legislation.

With friends like these in Washington, who needs the Democrats? That is, in large part, why the 2016 Republican primaries for president will be so crucial. Neither John Boehner nor Mitch McConnell is a real leader. They were never designed to be the leaders of the Republican Party; no one ever sought them out; and it is a position they themselves did not really seek. They are only the leadership of the party because the party is out of the White House. Republicans are beginning the process of seeking a leader who can unite the various wings of the party in a way the congressional leadership not only is not capable of doing but has no desire to do.

Early on, Scott Walker, the governor of Wisconsin, is shaping up to be more of a contender than most people thought. A "dark horse" is what people initially called him, but more and more conservatives think he may be their guy. He took a licking and kept on ticking in Wisconsin. He fought unions and won. He won a tough re-election race where the media openly rooted against him.

Other candidates are trying to show their viability, too. Jeb Bush, not exactly a crowd favorite at CPAC, was willing to show up and answer questions from the crowd. He has been willing to show he is neither his father nor his brother. He may not pull at the heartstrings of conservatives, but he knows that they also want a competent, capable manager, and he intends to fill that role.

But with the exception of Jindal, a lot of conservatives are muttering that the potential presidential candidates are failing to do one thing the crowd wants -- beat up on their own side. It is a difficult task because the candidates need local party leaders in the various states to support them. But the base of the party, now serially betrayed by Senate and House Republicans, wants a presidential candidate to fight back for them. Jindal, in his CPAC speech, began just such a fight against congressional Republicans.

Considering the popularity of Congressional Republicans among their own party, it might be a strategy all the candidates should pursue.