Erich Reimer
|
Posted: May 01, 2020 12:01 AM
Share   Tweet
The opinions expressed by columnists are their own and do not necessarily represent the views of Townhall.com. 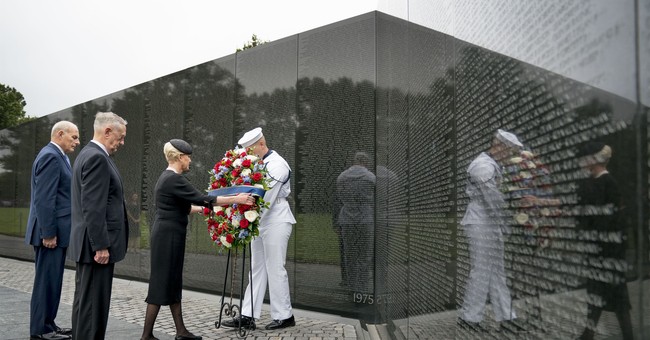 Forty-five years ago a blossoming nation, imperfect yet free, prosperous, innovative, breathed its last breaths as totalitarian Communism ruthlessly completed its takeover. The spilled blood of over 58,000 Americans over almost two decades, and upwards of perhaps a million Vietnamese, had come to its final conclusion as the Fall of Saigon took place on April 30, 1975 and the Vietnam War came to its close.

The footage we have of the evacuation of Saigon, the South Vietnamese capital, are legendary for the frenzied fear they captured of a people about to completely and suddenly lose their liberties - religious, economic, political, social - long-enjoyed. The images of chains of people hanging off American embassy helicopters fleeing the city immortalize those haunting moments. The boat refugee crisis the end of the Republic of Vietnam would sprout would continue to have major effects on the region, world, and United States for years to come.

Nowadays the world is in a very different place than during that time. Communist Vietnam remains an uneasy partner at times with the United States as a counterweight against the People’s Republic of China’s interests in the region and globally. The Vietnamese diaspora is still largely of a South Vietnam origin, having built robust communities throughout much of the world. The Vietnamese-American community in 2018 was estimated at over 1.78 million and Vietnamese-Americans have made extraordinary contributions to the fabric of American life everywhere including politics, business, science, cuisine, and the arts.

In 2015 Pew Research found that 76% of those polled in Communist Vietnam have favorable opinions of the United States. While in the immediate aftermath of the normalization of relations in 1995 Americans still viewed Communist Vietnam with little warmth it too has improved over time. This is despite still-widespread human rights abuses and systematic restrictions on personal, economic, social, and religious freedom in Communist Vietnam even as the now 95-million-person country has attempted to integrate into the world economy.

The lessons of the Vietnam War still influence our public and policy discourse immensely. The idea of mitigating “mission creep” risk has become commonplace as America was given a hard lesson in how a conflict can easily snowball over time and become harder to untangle from. The domestic social disruptions of the Vietnam War sent deep shocks, many of which still remain, to American trust in government and institutions. The mass protests, the draft, the innumerable scandals and public outrage administration after administration will provide fodder for movies, television, and other fiction to this day. We still have innumerable Vietnam War veterans who came home only to be spat on, derided as criminals, and many of whom still are inflicted with horrendous disabilities and impacts from their time of service.

Policymakers, historians, commentators, and the public still debate without resolution whether the sacrifices of the Vietnam War were “worth it” or whether anything could have been different in terms of lives lost or mission success. A CBS News poll in 2018 found that 22% of Americans thought the U.S. should have entered the conflict while 51% thought the U.S. shouldn’t have as compared to 19% and 73%, respectively, in 1985.

Vietnam’s future remains uncertain and its past still filled with pain and suffering for nearly all - Vietnamese, American, the other nations in the Southeast Asia region that became destabilized and fell into chaos - involved. The shocking toll of American lives lost and the wave of human suffering seemingly unstoppable still haunt us with uncertain lessons to this day. The American people clearly still ponder and wonder as the Vietnam Veterans Memorial on the National Mall in Washington, D.C. receives still an estimated 4.5 million to 5 million visitors a year.

Our commitment to to those who made sacrifices beyond measure in that harsh and unforgiving time has not faded. According to the U.S. Department of Veterans Affairs, over 2.7 million served in Vietnam, over 303,000 of whom were wounded, and those alive today still face challenges in everything from the lasting effects of Agent Orange to homelessness to PTSD and other mental health issues. Even as this generation of veterans slowly fades into history we should not lose our duty to them.