Erich Reimer
|
Posted: Sep 14, 2018 12:01 AM
Share   Tweet
The opinions expressed by columnists are their own and do not necessarily represent the views of Townhall.com. 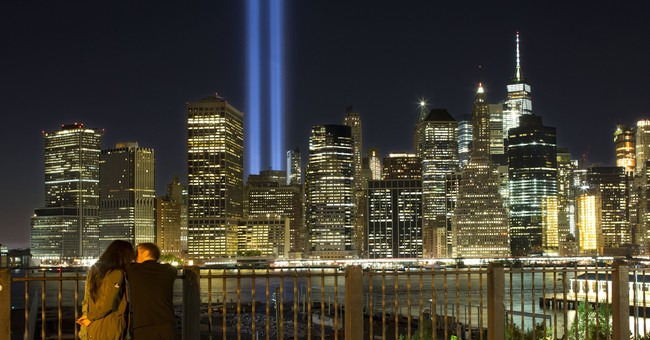 A few days ago our nation came together in remembrance of that fateful day 17 years ago in which almost 3,000 Americans were killed by those who sought to injure our spirit and the cause of human freedom.

From that dark day and those ashes came a wellspring of hope, of unity, and of courage. Americans enlisted and commissioned by the countless thousands in our armed forces to live out then-President George W. Bush’s famous impromptu “bullhorn speech” from the ruins of the Twin Towers that “I can hear you! The rest of the world hears you! And the people – and the people who knocked these buildings down will hear all of us soon."

As I discussed in Fox News during last year’s 9/11 anniversary, in that moment we were all reminded that despite the focus on the daily differences that define our debates and controversies, to our enemies we were all the same. We are members of the greatest country in the history of the world, an experiment whose impact has spread beyond our borders to lift up the entire human race in the ideals of liberty, dignity, and equality.

That spirit of shared togetherness seems a distant memory compared to the hyperpolarization of today. Our nation came together again this year to remember 9/11 and those lost, but the message of unity that came out of the blood and tears of both that day and the years of war and struggle afterwards, as well as thousands of American soldiers killed and tens of thousands wounded, seems to be struggling to stay alive.

Nowadays it seems like our partisan conflicts rip and tear at one another as much as if opponents were hostile nations or combatants. We let – on both the left and right - minor differences over various debates define us into increasingly fracturing camps and see others as “enemies” rather than part of the American family that, as any family sees and does, has a multitude of constant disagreements but remains united in unbreakable bond despite that.

I am from the state of New York. I was just a child during those attacks. Yet I remember distinctly how afterwards it was not just those in New York or the Northeast or the East Coast who came together to stand with the fallen and their families, but rather those from all across the nation. Those who never stepped foot within a hundred miles of the Twin Towers or even New York state wept and vowed vengeance with ferocity as much as those who saw the attacks firsthand.

In 2018 we are now 17 years from 9/11. In 2019 it will be 18 years, and so on and so forth. Time is a powerful corrosive force, particularly as new generations have grown and are now coming of age without any memory of that time or the years afterwards. Rather, they only see the dreadfulness of how our nation has frayed apart from that moment – which is why it is so essential to convey to them the memory of a time before our current discourse decline.

The attacks on September 11th are undoubtedly a date, as has been often said and as much as one can pinpoint, where the modern age came to be. Just like Pearl Harbor it was an event that rapidly escalated a series of events that defined world affairs for the entire point afterwards.

As has been said, the day before 9/11 was the “last day of innocence” and the idea that our post-Cold War era was going to be one of almost entirely prosperity, peace, and innovation and that the struggles that had defined the horror of the 20th century was finally over.

The 21st century will be difficult, as our nation and world faces challenges that are a mix of old ones reborn, such as rogue states and large competing powers, as well as new ones that past generations never saw – such as the rapid advancement of technology and its economic and military impacts.

Approaching those challenges with our current hyper-partisan and polarized-nation attitude seems futile, counterproductive, and destructive. But approaching it with that feeling that came out of the ashes of 9/11 – one of sacrifice, of unity, of strength and courage – means we may have a fighting chance amid it all.