Erich Reimer
|
Posted: Aug 13, 2018 12:01 AM
Share   Tweet
The opinions expressed by columnists are their own and do not necessarily represent the views of Townhall.com. 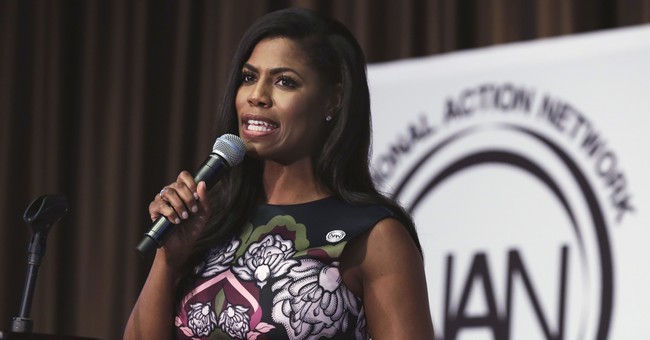 On Sunday former Director of Communications for the White House Office of Public Liaison and The Apprentice reality star Omarosa Manigaultrevealed on NBC’s “Meet the Press” that she had recorded her dismissal conversation with White House Chief of Staff John Kelly in the Situation Room. Not only that, but she actually played a 20-second recording of the conversation.

The White House Situation Room is one of the most essential and secure places for our country’s national security. It is where our civilian leadership, intelligence services, and military plan, discuss, and implement many of our top-level defense and security actions on a day-to-day basis.

Many legal and national security experts have pointed out already that Omarosa’s actions there may very well have violated federal law and are prosecutable. Ranging widely without partisan tilt, even some of those who fiercely oppose president Trump acknowledge this is a serious national security breach.

SCIFs, standing for “Sensitive Compartmented Information Facility,” are government areas where information that has security-related implications and classifications is utilized. Personnel that do not have the required clearance may under certain circumstance go into these areas under various procedures and supervision.

A violation of SCIF policies includes bringing in various electronic storage and communications devices. Violations are prosecutable under the federal criminal law, with often a look at the intent, practices, and habits of the violator as well.

In this situation, Omarosa’s actions, as evidenced by her playing the recording on “Meet the Press” in additional violation of clear legal sense, shows that she put her own immediate personal benefit above our country’s entire national security apparatus.

A personal cell phone can easily be hacked and is a particular target of foreign adversaries. While she recorded this conversation with Chief of Staff Kelly, she also seemingly has recorded many other conversations in her time at the White House including even with President Trump himself.

Who knows where and when she brought her recording equipment and who else may have been listening in, as it seems likely her equipment would not have serious protections – even then imperfect - that could resist state actors.

While there has been much discussion in the media of Omarosa’s character in general, in serious national security situations like this we need to focus on the facts and look at it through a serious, non-partisan lens. Indeed that is why people on both sides of the national security aisle have been calling for a serious investigation and potential prosecution of Omarosa for this violation, as it is a serious breach of some of our country’s most security-essential policies. After all, once again, the Situation Room is where our country’s command-and-control takes place on a regular daily basis.

As we see with the occasional federal arrest and prosecution of a Congressman or other notable public figure every so often, even those in relatively high-up places are not immune from our nation’s laws. And they should not be, as these laws are in place for a reason and a fundamental principle of our country is the equal application and due process given to all.

Omarosa was not a major figure in the White House by reports, but nonetheless she seemingly had enough access to sensitive locations and information and, based on the evidence she has been releasing, seriously abused that privilege and potentially violated major federal national security laws in the process as well.

While Omarosa is no longer in the White House, it remains uncertain simply how much of our country’s security and defense, let alone policymaking and institutional trust, abilities she put at risk through putting her own immediate well-being above the national good.

But likely, as she already is learning and is continuing to learn, in our country our justice system does not tolerate those who so brazenly toss it aside. Based on the evidence in the public square there is undoubtedly a serious case that she has broken essential federal laws in a way that is prosecutable. Furthermore, she has undoubtedly put our country’s national security at serious, major risk in this historic breach.

If she wants to avoid serious prison time she better start to take the advice of a lawyer as her most recent public interviews and statements evidence she most likely has not.