General Kelly, A Man Of Honor and Strength, Stays to Advise President Trump

Erich Reimer
|
Posted: Aug 01, 2018 12:01 AM
Share   Tweet
The opinions expressed by columnists are their own and do not necessarily represent the views of Townhall.com. 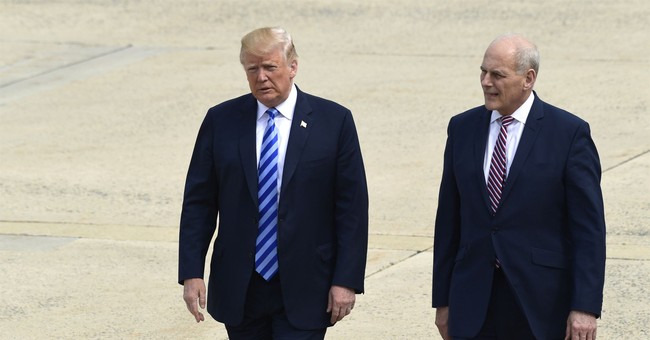 It was reported this week that White House Chief of Staff John Kelly would be staying in his role up at least until about 2020. At the president’s request and Kelly’s acceptance, Kelly would not be leaving this summer as some initially speculated. Rather he would be staying to continue to advise the president and the administration as he has done since his appointment in July of last year.

While the president’s administration is regularly subject to unfounded speculation and rumors, much of it later proved to be false, it appears this information has been confirmed by enough trustworthy sources to be believed.

Undoubtedly this is excellent news as Kelly’s keen knowledge, valorous character, and experienced management ability has seemingly served the president very well this past year. With Kelly as perhaps the president’s closest advisor and enforcer, the administration has been able to achieve numerous coordinated policy priorities ranging from tax reform to foreign summits, from the complex trade concessions to managing various crises at and within our borders.

When you look at Kelly’s background these impressive results should come as no surprise given that he, prior to several months as the president’s Secretary of Homeland Security and a brief foray in the private sector, had served our nation in the Marine Corps for over four decades and achieving the rank of a 4-Star General as well as Commander of the U.S. Southern Command.

Personally I believe we need more military members in public service and our national discourse in general. This is particularly so as we see an unfortunate decline in military-civilian relations and a consequent coarsening of our discourse where dishonor and lack of civility and candor seemingly has become more common.

We saw this prominently last fall when Kelly’s character was degraded on national news by those who have never lifted a finger for this country, let alone contributed, fought, or sacrificed even a smidgen of what Kelly, who lost his son, 1st Lt. Robert Kelly, in combat in Afghanistan in 2010, had given.

That Kelly has stood firm amid the constant firestorm of controversy and deranged hate from President Trump’s opponents is inspiring to all those who wish to see integrity, honor, sacrifice, and valor restored once again to our public discourse.

By all measures therefore Kelly’s tenure has been a success in both the tangible policy results achieved by and for the president as well as the hope he gives that people of good and strong character, those who work for and fight for this country, can have a place in our media and policy discourse as well.

In looking at the broader picture there unfortunately remains only so much one man can do. As much as our country and its people are leading inspiring lives, caring for one another, and continuing to sow the fabric of the American story, it is clear that the hate directed against the president and all those remotely supportive of those associated with him has revealed a dark underbelly within our public discourse.

We see this every day as lunatics throw water on or harass pro-Trump media personalities and public officials at restaurants or when a UGA Dean was recently made by the social media mob to apologize after saying, politics aside, he found Georgia GOP Gubernatorial nominee Brian Kemp to be a “nice guy” from knowing him from childhood.

John Kelly is a man worth, monetarily, an estimated $4 million based on financial disclosures. His paltry-in-comparison $179,700 salary reminds us of how he, and many others currently serving in the Trump administration, really have given up a lot personally to stand their ground, subject themselves to the fervor of those suffering from Trump Derangement Syndrome, and do their part in bringing our country back on track and expanding opportunity for the American people.

Spiritually, John Kelly is worth far more than a raw summation of his current resources in United States currency. His place in the White House both in terms of his day-to-day work and his public profile is immensely essential to the public’s belief and trust in our institutions and that the decay of the years prior is slowly being reversed.

I can’t imagine what it’s like being Kelly, who has literally fought and sacrificed more for this country over the course of his life than many can imagine. He is now subject to regular degradation by those barely a thousandth, if that, the man he is.

His sacrifice both before and now should be respected and I for one couldn’t be happier that he will continue to remain by the president’s side as the administration continues to craft policies that increase our liberty, prosperity, and hope.