With Eyes Open on Russia, US Should Not Sleep on China

Erica Rogers
|
Posted: Sep 24, 2022 12:01 AM
Share   Tweet
The opinions expressed by columnists are their own and do not necessarily represent the views of Townhall.com. 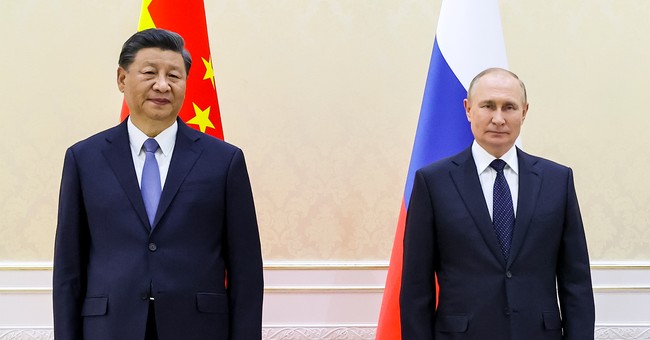 The news out of Ukraine is awful. The reports of torture and the mass killing of civilians gets worse every day. While news breaks that Ukraine is making gains in pushing Russia out of some territories, other reports indicate that Russia is preparing to mobilize even more troops to fight in Ukraine. The bottom line is that this war is not ending anytime soon.

The details from the conflict are disturbing and have drawn non-stop attention of the world’s media. The BBC reported this week, “Ukraine is keen to prove that the torture of civilians – a war crime – was systematic, not haphazard. Ukraine's President Volodymyr Zelensky says ‘10 torture chambers’ have been found in recent days in areas here in Kharkiv province retaken by Ukrainian forces.” The story pointed to forensic teams exhuming remains from 440 graves containing mostly dead civilians.

Americans are rooting for Ukraine to win the war yet fear the United States might be drawn into the conflict. The U.S. has pumped aid into Ukraine, angering Vladimir Putin – who has responded with saber rattling and hints he might use nuclear weapons. Even though the war in Ukraine has our attention, China’s actions toward Taiwan is a greater menace to U.S. interests.

Putin gets the headlines, but China’s aggression against Taiwan is a clear and immediate threat. What’s worse is President Biden’s dangerous ambiguity and messaging mishaps regarding America’s policy on Taiwan. On Sunday’s "60 Minutes," Biden was asked whether the U.S. would defend Taiwan from a Chinese military assault. He replied: “Yes, if in fact there was an unprecedented attack.” Biden’s red line puts America closer to direct conflict with China (much closer to any engagement in Ukraine). Biden has made no such statements over U.S. troops engaging Russia.

China is a greater threat to American security. According to The Heritage Foundation's August report, “every week, we learn more about the Chinese Communist Party’s (CCP) ongoing campaign of economic espionage and covert influence in the United States. In addition to cyberattacks and intellectual property theft, the campaign now includes attempts to discredit opponents of the Chinese agenda and interfere in U.S. politics. Yet despite Beijing’s increasingly brazen activities, the Biden administration decided earlier this year to end the Justice Department’s China Initiative.” The Initiative was an effort by the U.S. Justice Department to crack down on Chinese espionage and covert influence in American politics. One of the most prominent cases that shows this effort's degree of sophistication was a Chinese national named Fang Fang who targeted Rep. Eric Swalwell (D-CA) and reportedly engaged in helping in political fundraising and staffing his office.

The Chinese government would like nothing more than to embed people into the U.S. where they can influence policy. They also have an interest in sabotaging military operations. For some bizarre reason, the U.S. Air Force’s cutting-edge F-35 fighter jets contain a component in the engine that is manufactured in China. Reuters reported on September 7, 2022, “the U.S. Pentagon has stopped accepting new F-35 jets after it discovered a magnet used in the stealthy fighter's engine was made with unauthorized material from China, a U.S. official said.” Allowing China to manufacture a part that ends up in a stealth fighter that may be used to defend Taiwan is madness.

The U.S. taxpayers are on the hook for $1.7 trillion (trillion – not billion) for an aircraft that somehow ended up looking to China for parts. Because we know that the CCP is intentional, why wouldn’t the Chinese manufacture the engine piece to fail so that the aircraft would malfunction in combat? It makes perfect strategic sense for the CCP to do whatever possible to incapacitate the U.S Air Force, including corporate espionage aimed at the F-35. Perhaps the CCP would embed tracking devices as a way to ‘unstealth’ our aircraft? Regardless, American taxpayers are dolling out Rolls Royce dollars for an aircraft that might be more compromised by our enemies.

China is the major threat to America’s peace. The Chinese Communist Party’s open aggression in the direction of Taiwan could draw American intervention. The heart of the issue is clear: U.S. policymakers must take the Chinese threat seriously. The best strategy to avert an attack by China in the coming years is to make certain our military is prepared (not compromised by CCP espionage) and U.S. diplomatic actions are clear-sighted.

Erica Rogers is a freelance writer, editorial director at Capitol Allies, and was a legislative aide to former New Jersey Assemblyman Nicholas R. Felice. She lives in the DC metro area with her husband and five children.