The Pope At a Loss for Words

Emmett Tyrrell
|
Posted: Oct 18, 2018 12:01 AM
Share   Tweet
The opinions expressed by columnists are their own and do not necessarily represent the views of Townhall.com. 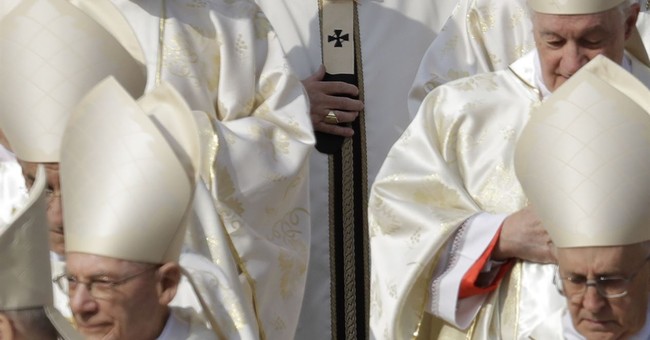 WASHINGTON -- Back in late August, Pope Francis declared that he would "not say a word" about a letter from a former Vatican envoy to Washington, D.C., who claimed among other things that he had ignored sexual abuse charges made against then-Cardinal Theodore McCarrick, formerly archbishop of Washington. The letter was written by Archbishop Carlo Maria Vigano, and it also implicated the present archbishop of Washington in a cover-up of McCarrick's decades of misbehavior. That would be Cardinal Donald Wuerl. Well, as of Friday, Wuerl's resignation has been accepted by the pope. So is the pope going to continue to remain mum?

In accepting Wuerl's resignation, the pope said the archbishop's admission to "mistakes" made in his handling of sexually abusive priests demonstrated his "nobility." Is this really the pope's spin on what has to be one of the church's most serious scandals in centuries? Is that all that he is going to say? His continued silence is characteristic of the pope and typical of the Vatican. He has still said very little about the predatory behavior of an astonishingly large number of American Catholic priests. In the diocese of Pittsburgh alone, 300 errant priests were mentioned in an August grand jury report that goes back 70 years.

Why is the pope so reluctant to speak out? Archbishop Vigano also leveled charges against the pope himself. Is the pope going to address those charges honestly? His silence and euphemistic references to the heinous acts committed by American clerics are going to ensnare him in an even bigger crisis. Vigano has already asked the pope to resign. This could get much worse. Around the world, other voices could sound for the pope's resignation.

Now there are indications that Wuerl and the pope are working on Wuerl's replacement. It is suspected that they are angling toward a candidate very similar to Wuerl. That could be a disaster. It is time that the hierarchy of the Church understood that the laity will not tolerate sending its children to schools and churches where abusive priests lurk. It is time for the laity and the faithful clerics in the church to take action and eliminate these predators.

The hierarchy has charge of the church in doctrinal matters, and even in administrative matters. The laity, however, controls the purse strings. We are not living in the late Middle Ages. There has sprung up a middle class over the past 500 to 600 years that has changed things radically for the Catholic hierarchy. It controls a huge amount of the church's assets. Moreover, the hierarchy controls very little wealth. Its vast land holdings have vanished. The bishops and cardinals ought to adjust their arrogance to these realities. Already, American Catholics, rich and not so rich, are calling for the faithful to pull back on their donations. It will set back the bishops' budgets very rapidly.

Donations are already down. I am told that parishes are experiencing as much as a 50 percent decline in their weekly collections. My guess is that very soon, church budgets are going to have to be adjusted to the new reality brought on by disgruntled parishioners. The cuts will be made quickly. Already, seasonal galas are being canceled. At one parish in St. Augustine, Florida, its fall celebration as been called off. The gala was scheduled for this month, but with the present scandals still going on, contributions have cratered. The gala has been postponed. Such cancelations are going to be repeated in the months ahead all over America. The smug hierarchy of the church ought to take heed.

The pope can dispense with his talk of the "nobility" of "mistakes" that were made by men such as Wuerl. These "mistakes" were in most cases heinous crimes. They left a scar on thousands of the faithful, both those who were accosted by these degenerate clerics and those who were the young people's parents and friends. There is no denying the fact that the behavior of a few has weakened the church of all the faithful. It is time for Pope Francis to acknowledge that he has presided over the Catholic Church in a time of unparalleled crisis. He has to stop speaking in the euphemisms of a political spinmeister and serve as a spiritual leader. Either that or he should vacate the Vatican, as Archbishop Vigano has suggested.