Did Someone Say, 'Have a Happy Memorial Day'?

Emmett Tyrrell
|
Posted: Jun 01, 2017 12:01 AM
Share   Tweet
The opinions expressed by columnists are their own and do not necessarily represent the views of Townhall.com. 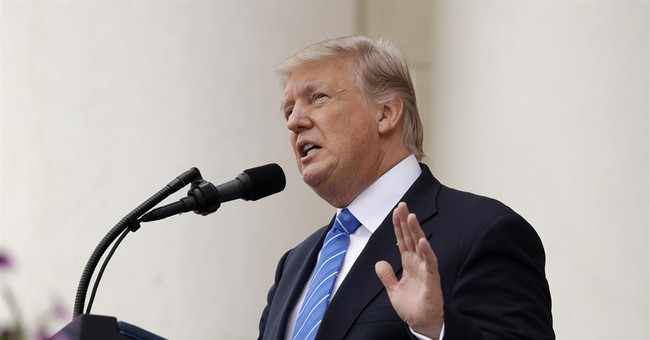 Last weekend, while visiting the New Jersey shore, I heard an astonishing number of vacationing Americans -- all well-intentioned, to be sure -- greet their fellow vacationers with a cheerful "have a happy Memorial Day." That cannot be right. The more I think about it, that greeting sounds as misguided as saying "have a happy Good Friday" on that solemn day. Memorial Day is a time to remember the fallen soldiers and sailors. It is a time for reflection. So do we say "have a reflective Memorial Day"? That is not right either. What is right? Is there anything we can say that is appropriate?

Memorial Day solemnizes the men and women in uniform who made sacrifices and fought in the defense of our country and paid the ultimate price. It is not Veterans Day, which solemnizes the service of all who wore the uniform in defending America, but the day that honors only those who died defending the American way of life, a free society.

The appropriate tribute for Memorial Day is acre after acre of cemeteries with little red, white and blue flags standing at attention before each grave of a fallen vet. Memorial Day is a sad day, and it is a serious day. Without those soldiers in those graves with freshly cut flowers and little flags, America would probably not be free today. War is hell, as the phrase has it, but it is an unavoidable hell, and on Memorial Day, it is inescapable to reflect on just how awful and unavoidable that hell is. Wishing vacationing Americans a happy Memorial Day is like replacing the graves with barbeque pits.

Yet, as I say, everyone at the Jersey shore was well-intentioned, which is for the best. After all, most Americans know that there is no alternative to the war we wage against terror. The terrorists are irrational barbarians. They do not even bother with putting out plausible propaganda. We are all to convert to radical Islam, or we will be killed. Not even a Quaker or a pacifist could settle for that outcome of this war. If ever there was a just war, this long bloody conflict is it.

I cannot think of a more brutal enemy than the Islamic State group. Nor can I think of a more irrational opponent. IS really does believe that it can return the world to the dark ages. The only thing just governments can do is execute it as soon as possible. This is something that every sensible person in the Middle East must believe. That is why President Donald Trump's speech to the 40 or so Middle Eastern leaders gathered in Saudi Arabia was of exigent importance.

A week after the speech he flew home to pay tribute to our noble dead on Memorial Day. At Arlington National Cemetery, he said to the assembled gathering, "Thank you for joining us as we honor the brave warriors who gave their lives for ours, spending their last moments on this Earth in defense of this country." It was an extremely moving speech, and he ended by saying, "Today we also hold a special vigil for heroes whose stories we cannot tell because their names are known to God alone -- the unknown soldiers." It was a beautiful speech -- sad, dignified, just right. I read it three times in search of an appropriate greeting for Memorial Day, but I did not get a hint as to what it should be. Do not feel bad, Mr. President. There is not a hint of it in the Gettysburg Address either. I looked.

There is probably no appropriate greeting for Memorial Day. It's possible this is one of those occasions for which there are no words to do it credit. Can you, my readers, come up with any? All we can be sure of is that on this Memorial Day, many American heroes were no longer with us. On future Memorial Days, many more will be gone. War is always hell, but sometimes it summons the best in people. Without the hell of war, American freedom would be doomed.