Once Again, Mr. President, You Misspoke

Emmett Tyrrell
|
Posted: Apr 28, 2016 12:01 AM
Share   Tweet
The opinions expressed by columnists are their own and do not necessarily represent the views of Townhall.com. 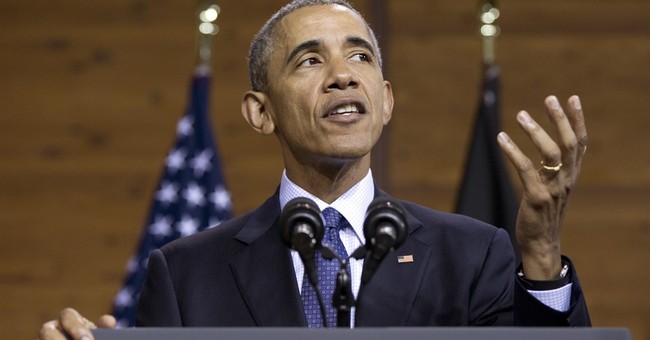 Washington -- President Barack Obama participated in a press conference with British Prime Minister David Cameron last Friday, during which he helped me decide whether or not the British should stay in the European Union. The vote is on June 23. That same day, our president penned a column in The Telegraph, a British publication similar to The Wall Street Journal. On both platforms, Obama argued that Britain should remain in the EU.

Until Obama marshaled his case, I was uncertain as to what our British allies should do. Now I know. After reading his column and listening to his speech, the answer became clear: Britain should opt out of the EU. Once again, Obama's reasoning made the obvious choice clear. Once again, he was arrogantly wrong.

Britain's economy is sound. There is no reason for it to be dragged down by the troubled European economies. It is far more stout in its anti-terrorist policies than other countries on the continent. Its immigration policies have proven more civilized, and it actually has a natural barrier to Europe's migrant crisis. It is called the English Channel. The channel is said to be even more formidable than Donald Trump's proposed wall along our southern border. Before Europe's migrant crisis becomes Britain's migrant crisis, the British should kick the EU coil. The Brits are perfectly justified to ignore Obama's bullying.

They should also see through his hypocrisy. After all, it is Obama that has led America in retreat. He has withdrawn our global influence. Why now should Britain follow his call? Be consistent, Mr. President. You want us out of the Middle East; you want us to be less dominant in Europe. Let Britain make up its own mind, and if the British people want to be less dominant in Europe, so be it. Welcome their defense of British sovereignty. The EU is hobbling a great nation with its morass of regulations and infringements on British sovereignty. Let Britain be Britain. After all, America will soon be free of you.

You spoke on Friday of America's "special relationship" with Britain. It is one of the few times you have mentioned that historic relationship. I think it is arguable that you are the most anti-British president in modern times. You, without any explanation, summarily removed the bust of Winston Churchill from the Oval Office shortly after your inauguration. If a Republican is your successor, I think it would be appropriate for him to return Churchill to his honored position. Without his leadership in World War II, we might all be speaking German.

At least Churchill was half-American. The mayor of London, Boris Johnson, made the point last week that your ancestry is "part-Kenyan," and he speculated that your removal of Churchill might have revealed an "ancestral dislike" for Britain. Kenya was a British colony from 1920 until it gained its independence in 1963. Through this act, you opened yourself up to such speculation, and then you recklessly entered into a hotly debated British controversy. You might have anticipated Johnson's rude hostility. Yet in your arrogance, you proceeded.

Actually, ever since Obama removed Churchill's bust from the Oval Office, advocates of this special relationship have been noting his apparent distancing of the U.S. from Britain. We have pondered his apparent disrelish for Britain and its imperial past. Years have gone by, and he has done nothing to quiet our suspicions. But then, out of the blue, he went to London last Friday to lecture the British on the need for their country to remain in the EU. He even threatened them with the warning that U.S.-UK trade deal is "not going to happen anytime soon."

In saying this, Obama was again wrong. Look at the calendar. I say to my fellow English-speakers in the United Kingdom: You will not have long to wait long for a trade deal with the United States. It will come soon after Inauguration Day in Jan. 2017.