Emmett Tyrrell
|
Posted: Mar 31, 2016 12:01 AM
Share   Tweet
The opinions expressed by columnists are their own and do not necessarily represent the views of Townhall.com. 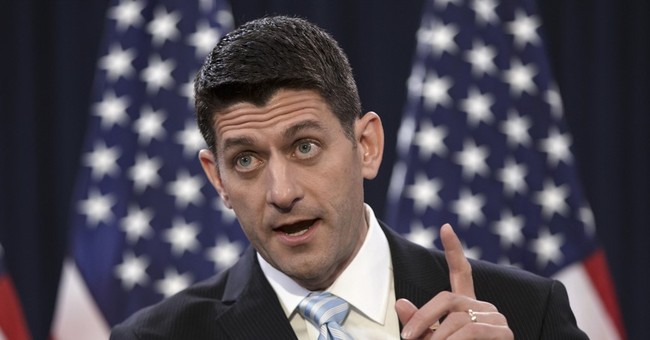 The House Speaker, the honorable Paul Ryan, recently expressed his hope for a more "confident America." He went on to say "we don't shut people down. If someone has a bad idea, we tell them why our idea is better. We don't insult them into agreeing with us." He spoke of the superiority of persuasion to execration.

Close observers of the Ryan metier thought he was addressing Donald Trump. After listening to the campaigns in both parties, I have a different view. In my mind, Ryan was urging caution on everyone campaigning for the presidency this year. Certainly, his remarks were aimed at his fellow Republicans, including Sen. Ted Cruz and Gov. John Kasich. Yet they were also aimed at Sen. Bernie Sanders and Hillary Clinton, who both disparage Trump, Cruz and Kasich -- and forget not the infamous one percent -- whenever they take the lectern.

Ryan calls for reflection and restraint from both parties. Nonetheless, he is in a tricky position. In a year of riotous politics, he has taken the chance of offending the rabble-rousers by calling for a sense of restraint. He even has a tea partier challenging him back home.

Of course, he has no alternative given his lofty goals in the House of Representatives. As speaker of the House, he is responsible for getting budgets through that chamber that are acceptable to a majority and also advance his free market policies. He has never been known for heated rhetoric, and he is not calling for it now. His role is unique in national politics: He wants to be effective, which seems to be what the majority of Americans call for, but he is an advocate of free markets.

Ryan comes from the Jack Kemp corner of the Republican Party. Thus, he would solve the problem of poverty and unemployment through pro-growth policies. He favors tax cuts as the route to economic growth. The war on poverty has not worked. We have almost as many Americans living beneath the poverty line today as when President Lyndon B. Johnson began his war on poverty more than five decades ago. All that has changed is that we have spent, by Ryan's reckoning, $15 trillion in a futile effort to extinguish poverty. Ryan wants to try to end it with alternative economic growth. He will have to keep his Republicans united in the House to be successful.

He also wants to repeal Obamacare. This, too, will require a united Republican Party. There are various approaches to repealing Obamacare, but his Republican colleagues are going to have to settle on one approach. Ryan has advanced the pieces; he must now bring the pieces together. Finally, he says he wants to start paring back the federal debt that President Obama has doubled in his nearly eight years in office. That is going to be tricky, too. He will need party loyalty once again. No wonder he has been on a crusade to cool rhetoric.

Moreover, as chairman of the Republican National Convention in Cleveland this summer, he is facing the possibility of the first contested convention in decades. He has to remain neutral. He is right to show no partiality. Whether Trump arrives at the convention with the necessary number of delegates for victory, or whether new candidates enter the race, Ryan has to be an honest broker. His role at the convention may be very large.

So, now he has asked that the race for the presidency proceed with dignity. At the last Republican debate on March 10, there were signs that it would proceed with dignity. But since then there has been a tabloid eruption and a battle of wives on Twitter. My guess is that things are going to settle down now. The Republicans will act like statesmen; Sanders and Clinton will continue to bore; Ryan will play his roles as the leader in the House and the honest broker at the Republican convention. Nevertheless, the elections of 2016 will have some surprises.

Ex-Gorsuch Law Clerk Takes a Blowtorch to the Imaginary Law Violations the FBI Cited in Trump Raid
Townhall
David French accuses DeSantis of attacking the First Amendment and it does NOT go well for him, like at all
Twitchy
Documentarian Discovers Some Unusual Shots in His Jan. 6 Footage That Blow up the Dem Narrative
Redstate
Watch: Huge Mob Flashes California 7-Eleven and Picks It Clean
PJ Media