Joe's Last Race Is About To Begin 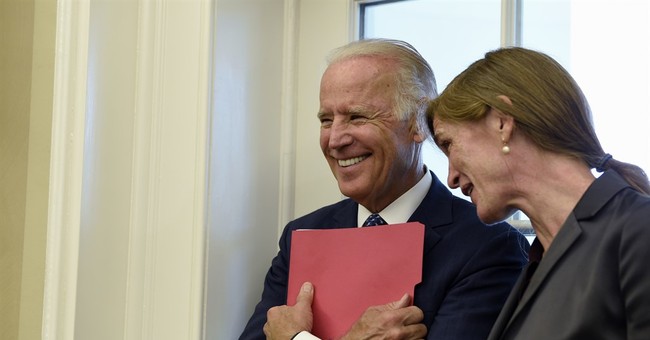 Have we not had enough presentiments of her presidency in the brief months of her candidacy, and are they not sufficiently alarming? Can the country or the Democratic Party go through the Clinton scandals all over again? What we have thus far seen from her State Department scandals are very similar to her White House scandals in the 1990s and, come to think of it, to her years in the Arkansas governor's mansion in the 1980s.

Think about it, Joe. She was given a clean bill of health when she was appointed secretary of state. In her new role at State, she began de nouveau, as the French would say. Her record as a diplomat was spotless. Consider what she did with her spotless record. She, working in collusion with her husband (whom she should have distanced herself from years ago), achieved the most corrupt record of any secretary of state in American history, and it took only one term in office. Not to put too fine a point on it, but no secretary of state has ever amassed such a record. Clinton now stands accused of malfeasance, influence pedaling, obstruction of justice and amassing a $139 million fortune from dubious sources in record time.

Joe, do we want to see the Clinton administration reprised?

I talked to one of my secret Democratic confidants recently, and she said if Biden is thinking of running, "he should go for it." I think so, too. So do many Democrats and Independents. Maureen Dowd says Biden owes it to his recently deceased son, Beau. I say he also owes it to the country. The country cannot waste the next four years as journalists and others run down Clinton scandals with wags like me laughing on the sidelines. Since the announcement of her presidential candidacy a few months ago, Hillary and Bill and the whole Clintonista crowd have given us a glimpse of what they are planning. It looks very much like a criminal operation or at least a Third World country.

Now, some have noted that Biden is given to gaffes. In fact, even I have occasionally made that claim, coining a word for it. I found Biden gaffable. Yet at least all of his gaffes are amusing and at times endearing. Moreover, no Democrat has ever been heard to complain. Some even say it adds to his "average guy" image. They call him "Joe Six Pack." As for Clinton, she has been making gaffes that are an embarrassment, beginning with her line about leaving the White House "dead broke." As I recall, when she left, she was trailing behind her truckloads of White House property. That caused her ratings in the polls to crater.

Now we are waiting for the Justice Department to act on the allegations against her. Democrats -- even loyalists -- are fearing the sound of another and another shoe falling from outside the Justice Department. It is really amazing how fast it all happened. As for Biden, the evidence is all around that he is sounding out his vast circle of friends and confidants. He has pursued the presidency at least twice before. Does anyone believe he is not ardent for the office once again? This time he might make it.

One other thing strikes me as worth saying, though I, at least, have said it before. Of all the candidates pursuing the presidency, Clinton is the most ill prepared. She lived in the White House for eight years and learned very little from the experience. A White House military adviser first brought this matter to my attention in 2000. She lived there and learned very little. It explains a lot about the mess she is in today and was in in 2008.

Biden has not lived in the White House, but he has thought about it. He is an old pro in public life. Now he has this one last chance. He will go for it. Win one for Beau, Joe.