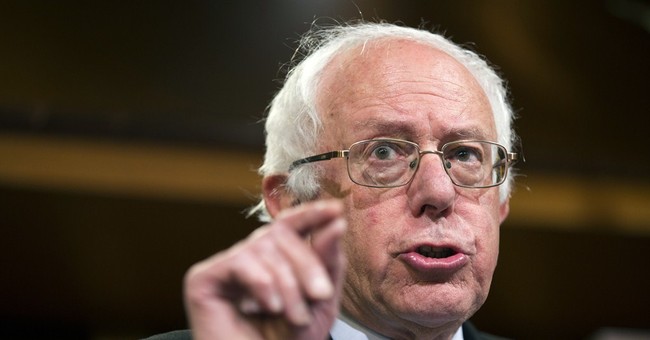 WASHINGTON -- In this land of capitalist chaos, there is something quaint about Bernard Sanders, the senator from Vermont, running for the Democratic presidential nomination as a Socialist. He is not running as a liberal or a progressive, or even a vegetarian, but as a Socialist! Apparently, he envisages the federal government as being populated by a very professional bureaucracy, utterly removed from politics, its members all waiting orders from the incoming government, whether their president be an out-and-out capitalist or even a very abstemious Socialist. There the federal bureaucracy stands, waiting to do its president's bidding!

Of course, recently we have learned from the scandals at the IRS and the Department of Veterans Affairs that Washington's bureaucracy is more likely composed of venal money-grubbers and Democratic Party hacks, but Senator Sanders can view them as a saintly corps if he wants. That does not mean that he will be playing a minor role in this election cycle. He will. His role is just not going to be that of the Democratic presidential nominee.

How could it? The Rasmussen Reports recently found that only a minuscule 13 percent of likely voters were entranced by the idea of electing a Socialist for president. Moreover, Sanders' platform of confiscatory taxes on the rich combined with a gigantic spending spree was just presented to the electorate of Great Britain by that country's socialist party. The pollsters all agreed. The socialist party was headed for victory. We all know what happened on Election Day. The electorate delivered Labour its worst drubbing in almost 30 years.

No, I do not think that Senator Sanders will be remembered in American history as the Democrats' 2016 presidential nominee, much less as America's president-elect. Yet, hold on. He does have a role to play. If you are numbered among the puny but deluded 13 percent who favor Bernie for his Socialism and his confiscatory taxes, do not give up hope. Your candidate matters. Bernie will be to 2016 what Senator Eugene McCarthy was to 1968. This is to say, Bernie will be a spoiler. Senator McCarthy's challenge to LBJ in New Hampshire dissuaded the president from seeking re-election, and crazy Bernie's challenge to Hillary in the Granite State will dissuade her from further tarnishing her reputation with a continued run for the White House.

McCarthy's 42 percent of the vote did not beat LBJ, and Bernie will not beat Hillary. Yet his challenge will be the last straw. Hillary is an old 67. Her health is not what it was before her mysterious concussion at the end of 2012, and her reputation for honesty and integrity can only take so many hits as we are now seeing with the publication of Peter Schweizer's "Clinton Cash: The Untold Story of How And Why Foreign Governments and Businesses Helped Make Bill and Hillary Rich." There are more hits coming.

Yet who will step in to push her out? Close observers say it could be Senator Elizabeth Warren from Massachusetts, but she is unseasoned and accumulating enemies by the hour. The Democrats have a seasoned candidate already out there. He is a terrific campaigner and knows national politics as well as Bill Clinton. He is Governor Jerry Brown from California. He has been governor four times? He has run for the presidency three times. He has held more lesser offices than Hillary and Bernie combined. He has adapted to the changing times, calling for devolution of power to local government, balanced budgets, and, now, he is facing a statewide crisis in the California draught. He will again show himself to be a leader as he has for decades. Skeptics will point out that he is 77, but he is an astonishingly young 77. He is the Ronald Reagan of the 21st century. Governor Brown will give the Republicans a run for their money.

Now from my colleague at The New York Sun, Seth Lipsky, comes another candidate for the Democratic nomination, Michael Bloomberg. Certainly the billionaire former mayor of New York has the money and coming from the international center that is New York City he has plenty of experience with world leaders. Lipsky reminds us that Bloomberg's message is "an unbridled pro-immigration, pro-business message." That would calm independents' fears that the Democratic Party has become the party of Socialists and grifters.

So there you have it. Already, not halfway into 2015, I have come up with two superb alternatives to Hillary. Furthermore, I have demonstrated how her candidacy will wilt in the New Hampshire snows. Who says the Democrats have no alternative to Hillary, the inevitable?