Tea Partiers and the Angry Left 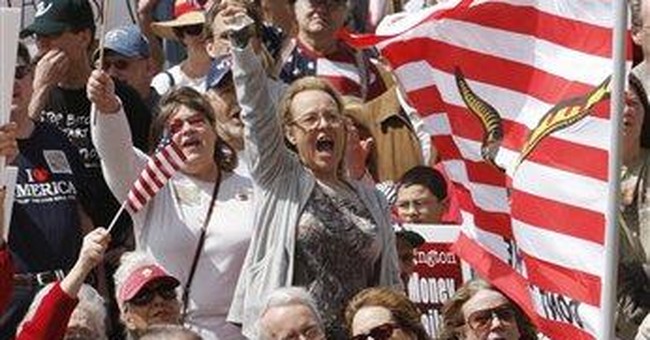 WASHINGTON -- Whatever happened to the mainstream media's high regard for "anger" in politics? From roughly the midterm elections of 2006 through the presidential election of 2008, the "Angry Left" seemed to grow in stature with the media. Liberal pundits spoke of it with a hush of awe. By the election of the Prophet Obama, the Angry Left had acquired a hallowed public status similar to that of the "muckraker" or the "consumerist," though no consumerist whom I ever have known has been agreeable company. Would you want to sit down to tea with, say, Ralph Nader? Certainly Ralph never has been known for his hearty laugh or elegant manners.

Well, gratefully we now are getting some solid information about the Tea Partiers; and, though they are angry, they are apparently not homicidal, as one member of the Angry Left proved to be recently. I am thinking of professor Amy Bishop, who blew her top at a faculty meeting at the University of Alabama in Huntsville and, police say, shot six of her colleagues, killing three. Years earlier, she shot her brother to death in an outburst that she survived free of criminal charges, possibly because of her family's political influence in her Braintree, Mass., hometown.

Between that shooting and her recent run-in with the law in Huntsville, Bishop came under suspicion of mailing a pipe bomb to a Harvard University medical doctor and was convicted of assaulting a woman in an International House of Pancakes in Peabody, Mass. Reports the Boston Herald, "a family source" described Bishop as "a far-left political extremist who was 'obsessed' with President Obama to the point of being off-putting." For obvious reasons, the identity of this "family source" has not been revealed. The source could be accused of having Tea Party sympathies.

The information we now are getting on the Tea Partiers is reassuring, at least to me. It comes from Eric O'Keefe, the head of a Chicago-based organization devoted to free markets and limited government, the Sam Adams Alliance. O'Keefe has surveyed 49 Tea Party leaders in 38 states and found that what angers these Tea Partiers' harbor is mostly benign. "They want to make a difference," as good-government types are wont to say. Seventy percent of them told O'Keefe they hope to "have a positive impact on the country." According to O'Keefe, they are neither "political junkies nor crusty right-wing extremists." Nearly half never have been involved in politics before. What angers them is the reckless federal spending of the Democrats in 2009.

It is this combination of anger and concern over profligate federal spending that seems to have the media's bien-pensants cooling their ardor for anger in politics. They contemplate the Tea Party protests, and their minds fill with visions of homicidal maniacs protesting the Internal Revenue Service and flying private planes into government buildings. In fact, when Andrew Joseph Stack III, a homicidal maniac angered by the IRS, flew his plane into the IRS offices in Austin, Texas, on Feb. 18, New York Times columnist Frank Rich could not get the Tea Partiers off his mind. He said it would be "glib and inaccurate" to link the murderer to the Tea Party movement. Yet that is precisely what Rich did in his Feb. 28 column, despite having read Stack's Web site manifesto, which expresses sentiments nothing like the mild sentiments discovered by O'Keefe.

In his manifesto, Stack howls against "the vulgar, corrupt Catholic Church," "the monsters of organized religion," "presidential puppet GW Bush and his cronies," the "rich" and the "wealthy." Actually, when I read these sentiments, I thought of Gore Vidal and was reassured knowing that Gore is, for a certitude, too old to qualify for a pilot's license. How Rich could read these sentiments and think of the Tea Partiers is difficult to fathom, though I am not very well-versed in the workings of a deranged mind and Rich has been mildly deranged for years.

Any time he takes up the matter of politics in his column, Rich becomes unhinged, usually drawing a conclusion that is precisely the opposite of the one the evidence available indicates. Certainly that is what Rich has done regarding Stack's manifesto. With its thunderclaps against organized religion, the Catholic Church, our 43rd president and the rich, Stack's manifesto is hardly the work of a Tea Partier. It is the work of an indignado of the Angry Left. I can understand Rich's embarrassment, if embarrassment it be.