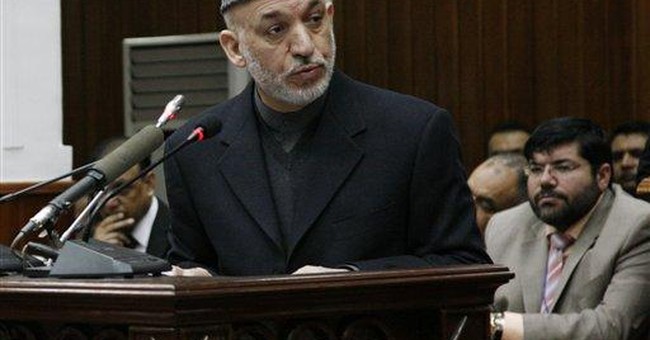 WASHINGTON -- I am beginning to think of Afghan President Hamid Karzai as Hamid Karzai, D-Afghanistan. The way he inveighs against troops who are fighting to secure his government in that inhospitable realm sounds very much like Sen. Richard Durbin, D-Ill., inveighing against our troops during the Bush administration. Not only that, but now Karzai has arrogated for himself a formerly independent Afghan commission whose duty it was to monitor elections for fraud and other irregularities. Last week, he signed a decree that henceforth will allow him rather than the United Nations to appoint officials to the Electoral Complaints Commission, which the United Nations had set up in the aftermath of Karzai's rigged re-election. So maybe it would be more appropriate for me to think of him as Hamid Karzai, D-Chicago.

We now have under way in Afghanistan the most massive military operation since autumn 2001, when our forces sent the Taliban fleeing to their caves and mountain refuges. Thousands of American, British and Afghan troops have overrun the former Taliban stronghold of Marjah. There they are trying to establish a proper civilian government while capturing or killing a sufficient number of Taliban to persuade the rest to lay down their arms. Yet on at least two occasions, civilians have been killed. This was not because our troops were reckless or insensitive to the plight of civilians. A major goal of our forces is to minimize civilian casualties so as to win, as they say, the hearts and minds of the Afghans. So strict are the rules of engagement that they have increased the risk of injuries and fatalities to our forces.

Yet still, civilians have been wounded and killed -- not exactly by accident. A little-remarked fact of war against Islamic fundamentalists is that they use civilians (Muslims!) as shields. They even use holy places, such as mosques, as shields for stationing their troops and storing their weapons. This use of civilians as shields takes place in the Palestinian territories, where the death of civilians is used as propaganda against the Israel Defense Forces, and, of course, in Iraq and Afghanistan, where the death of innocents is seen as a propaganda triumph against us.

Islamic fundamentalists not only use civilians as shields but also target them with roadside bombs and -- even grislier -- with suicide bombers attacking bazaars and cafes. The strategic purpose is to create dissension and demoralization among the citizenry. People familiar with warfare against Islamic fundamentalists know this. Surely Hamid Karzai, D-Chicago, knows this. He also knows that our airstrikes are nixed if our monitors perceive civilians in targeted areas. Likewise, our troops hold their fire when the enemy is using civilians -- often women and children -- as shields while the brutes travel through the country, planting bombs and planning ambushes. Nonetheless, he assists them in spreading the propaganda that we are responsible for civilian deaths.

Over the weekend, he opened the Afghan Parliament with a diatribe. It was not against the Taliban, who are in insurrection against his government, but against our troops, who are training his army, pursuing the Taliban and trying to hand over a secure Afghanistan to him. He brought along a picture of a young Afghan girl who lost her family during a mid-February strike by our forces against suspected Taliban. Now that is a bit of public relations wizardry, but it is at the expense of his protectors and on behalf of his enemies. His protectors, led by Gen. Stanley McChrystal, have apologized for their involvement in civilian deaths. His enemies who have put the civilians in harm's way apologize for nothing.

Reviewing his presidency and its corruption, ineptitude and arrant stupidity, I am convinced of the aptness of thinking of President Hamid Karzai as Hamid Karzai, D-Chicago. Perhaps this year, the Democrats will ask him to speak at one of their Jackson Day dinners.