Mark Sanford and the Odd Fellows 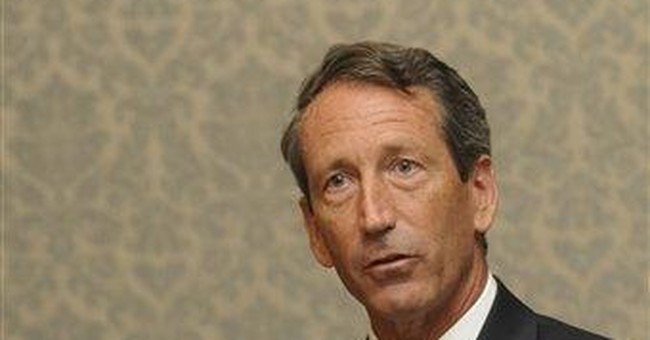 WASHINGTON -- Why is the governor of South Carolina still a national news story? This past week, Gov. Mark Sanford was again in the news, and neither sex nor romance had anything to do with it. I can understand his first great news splash, after he completely vanished from the face of the earth. Then he duped his staff into announcing that he was communing with the birds and the bees along the Appalachian Trail. Then it was discovered that he had actually been emulating the birds and the bees down in Argentina with a secret Argentine inamorata. She is easy on the eyes and certainly would have been worth the trip, if only he were not married with four children and if that bizarre deception about woodsy trails had not been attempted.

At the news conference following the debacle, he referred to his Argentine beaut as his "soul mate." Obviously, the guy was in love. It was the real thing. Had he been from a more romantic place than South Carolina, his ratings would be sky-high. Sanford should be the mayor of Paris or an alderman in Monte Carlo, if they have aldermen in Monte Carlo. Yet South Carolina is not Monte Carlo, and his fellow Republicans from the Palmetto State want him to retire, or he will be impeached when the Legislature convenes in January. So now he calls news conferences and invites reporters to follow him as he travels throughout the state to Lions Club meetings and Kiwanis meetings and perchance an occasional meeting at an Odd Fellows lodge. He does seem a bit oblivious. At these statewide meetings, he apologizes and then implores the assembled -- he calls them "friends" -- to help him ram through important legislative changes. He calls them "conservative reforms."

Well, I, for one, find Gov. Sanford tedious. Even his syntax is tedious. On the front page -- yes, the FRONT PAGE -- of The Wall Street Journal, Gov. Sanford is reported as saying: "I have a newfound level of humility, knowing how hard I work and how hard I push is not the ultimate driver of change. Power resides with people." Now, I always have said that of all the virtues, the one that I find absolutely mystifying is the so-called virtue of humility. I mean, what is the point of it? Gov. Sanford's declaration strikes me as a concatenation of non sequiturs. What does his hard work have to do with humility? What does the power of the people have to do with humility? From all I can tell after reading this week's news stories, "the people" of South Carolina want him to resign.

Nonetheless, the governor is traversing his state working to advance a conservative agenda of reform. It sounds as if the reforms are, as the Journal reports, "dull." One would set up a government department to monitor state spending. As things stand today, that function is performed by a board controlled by legislators. All right, that is like a board of foxes monitoring the henhouse. Gov. Sanford's reform makes sense. But it is, indeed, dull. It is nothing like major regulatory reform, major tax cuts, privatizing government functions, perhaps paying for major roadways with user fees.

This brings us to one matter that is, for a certitude, a national story. Gov. Sanford is a conservative, and so successful have conservatives been at governing during the past 20 to 30 years that they do not have much of an agenda left. They succeeded throughout the country at fighting crime, lowering taxes, streamlining government -- at least, making an effort to streamline government. To a large degree, conservatives are the victims of their success. Their policies solved most of the major problems of the last half of the 20th century: the Cold War, the urban crisis, stagflation.

If it had not been for the 9/11 attacks, President George W. Bush would not have had much to do during his presidency. He might have addressed the housing bubble, but there was no clamor to do so. In fact, both sides of the aisle seemed to think subprime mortgages were written into the Bill of Rights.

Yet with the Obama administration in place, it has become increasingly clear that very soon, the conservatives will have plenty on their agenda once again. They will have the fiscal mess that Obama is creating. There will be health care in need of market reform and malpractice reform. Foreign policy is going to be in dreadful need of adult supervision. Most alarmingly, after the Obama administration demoralizes our intelligence community and mucks up the wars in Iraq and Afghanistan, our defense policies are going to need urgent attention.

So very soon, conservatism will have a very full agenda, though I doubt that Gov. Sanford will be very much involved.