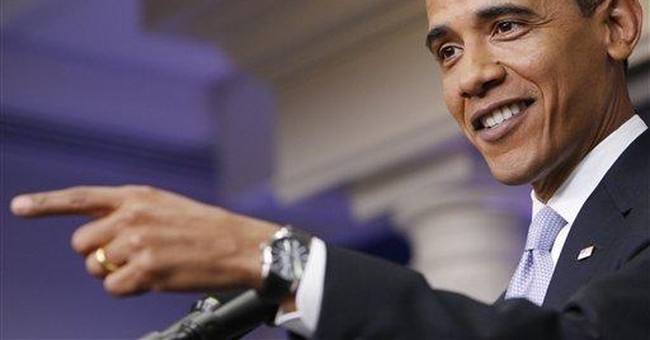 WASHINGTON -- The anti-government protests in Iran following the government's rigged elections are doubtless a little more than the "robust debate" among Iranians that President Barack Obama welcomed during the election. Some of the debaters have been shot dead. Others have been hustled off to jail. I wonder whether this is an eye-opener for our novice president.

Conservatives have objected to his Laodicean calm in the first days of the bloodshed. He fastidiously refused to take sides. Only by the weekend did he come to his wits and call "on the Iranian government to stop all violent and unjust actions against its own people." After that, the bloodshed got worse. On Tuesday, he expressed "concerns," but by then, the demonstrators had a martyr, 26-year-old Neda Agha-Soltan, an apparently nonpolitical singer who was shot dead, presumably by government riot-control troops, though she was not actually in the protest. The videotape of her death has been circulating in news media and on the Internet ever since.

Though the nonsensical Mahmoud Ahmadinejad remains the president of Iran after the disputed elections, Ayatollah Ali Khamenei is the country's supreme leader. Having lost confidence in the police and members of the street militia, the Basij, he called out the Revolutionary Guard to clamp down on the protests. Interestingly, the head of the guard in the province of Tehran, Gen. Ali Fazli, a veteran of the Iraq-Iran war, refused to fire on his own countrymen and was arrested. The guard itself is a powerful force in the country, with its own institutions and considerable independence from the government and the Rev. Khamenei's Guardian Council.

Now it seems likely that the guard will turn Iran into a military dictatorship, with the Rev. Khamenei slipping into a gray space somewhere between political power and spiritual authority. Thus, the outcome for now of the street demonstrations in Iran might well be what we Americans call the division between church and state or between mosque and state. Whether this will render Iran peaceful and an agreeable member of the world community is dubious. The Revolutionary Guard obviously is full of angry militants. Perhaps the best that the West can hope for is the ongoing splintering of the ruling military dictatorship, with some members of the guard resisting attacks on their countrymen and others attempting totalitarian control of Iran.

Yet my question remains: Has our sententious new president learned anything from the unforeseen violent culmination of the Iranian elections? Frankly, I doubt it. He reminds me so much of our most recent sanctimonious pontificator, President Jimmy Carter, who at first attempted to end the Cold War by lecturing Americans against their "inordinate fear of communism." Then the Soviets became more aggressive. Finally, Carter began the military buildup for which his successor took justifiable credit. President Ronald Reagan knew the value of a strong military in support of resolute diplomacy.

Neither Carter nor Obama has any sense of the linkage of the two, and now it looks as if the Obama administration is going to cut back on our military, even as the dangers to world peace grow.

At the heart of our new president is, it seems to me, ambivalence. Within him exist opposite attitudes. What we have seen during the protests in Iran is not a clear sense of geopolitics, but uncertainty. President Obama has not had a clue as to what to do. His White House aides are actually claiming that his muddled Cairo speech before the Iranian elections inspired the young demonstrators. "We're trying to promote a foreign policy that advances our interests, not that makes us feel good about ourselves," an anonymous Obama administration aide told The Washington Post. That is precisely the opposite of the truth.

Increasingly, it is apparent that we have not only a very unseasoned president in the White House but also a very weak one. At a surprisingly early point in his presidency, Obama's program is in disarray. On health care, he is under fire from the left and the right. His cap and trade policy is in trouble. This week, The Hill reports that "congressional Democrats are largely ignoring President Obama's $19.8 billion in budget cuts." His Democrats on Capitol Hill are intent on cuts that he has not asked for, some of which shave funds for his priorities.

Let the mainstream media purr on about this president's mastery of government. My sense is that he is out of his depth. His dithering over the Iranian protests is but one bloody example.