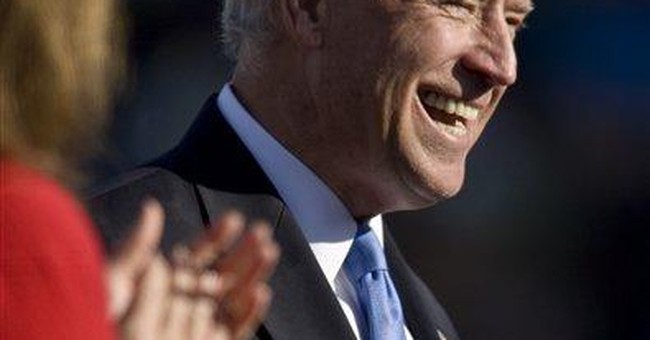 WASHINGTON -- So intense have the Republicans' suspicions of their Democratic rivals become in the last weeks of this presidential race that they now are accusing the delightful Democratic vice presidential candidate, Sen. Joe Biden, of withholding the results of his brain scans from his recently released medical records. Their charge is false. The results of those brain scans are spread across several pages of the senator's records for all to see. Admittedly, those pages appear to be blank, but what did the Republicans expect? Have they not been listening to the great man's solemnities on the campaign trail?

In an interview with his fellow airhead CBS' Katie Couric late in September, the senior senator from Delaware expressed his firm belief that Franklin Delano Roosevelt was president of the United States in 1929 and that in that illusory year, FDR had at his command a large and apparently receptive television audience. Ha, ha, ha -- and the mainstream moron media insist that Sen. Biden's opponent, Gov. Sarah Palin, "stumbled" when she was interviewed by CBS' cutie. Stumble Gov. Palin might have, but Sen. Biden fell head over heels, and he has continued to do so.

There have been his repeated bold intimations that while flying over Afghanistan in a helicopter he was forced down by enemy fire. Actually, the threat was from inclement weather. Or savor this: Despite being caught years ago plagiarizing a British Labour leader's public recollections of life in the Welsh coal mines, Sen. Biden again has rather incautiously recalled being a coal miner himself. His recollection is in error. Most deliciously, this month he yawped: "The No. 1 job facing the middle class, and it happens to be, as Barack says, a three-letter word: jobs, J-O-B-S, jobs." Possibly the senator's handlers have told him to avoid four-letter words on the campaign trail. At any rate, for those of us who enjoy a laugh, Sen. Biden's campaign has been a picnic.

Now he apparently is collaborating with the McCain-Palin campaign in stressing Sen. Barack H. Obama's inexperience. "We're going to have an international crisis, a generated crisis, to test the mettle of this guy," Sen. Biden warned, referring to his running mate, Sen. Obama, the least experienced presidential nominee in more than 100 years. Oh, wait. I forgot Wendell Willkie, "the barefoot boy from Wall Street," who ran against FDR, the television pioneer.

That the gaffable Sen. Biden has not become the laughingstock of this campaign is astonishing. Equally astonishing is the fact that Sen. Obama's inexperience -- though there have been a few beautiful gaffes from him, too -- has not become an issue. Instead, the members of the media and their fellow Democrats have made a vexed issue out of the perfectly normal -- albeit abnormally charming -- Gov. Palin. The claim is that she lacks the experience to be president. So, too, does the Prophet Obama.

The media's coverage of this election has been the shoddiest I ever have seen. The country has been walloped by a financial crisis almost wholly created by the Democrats' relaxation of mortgage lending to low- and moderate-income borrowers. It is a matter of record that the Republican nominee attempted to tighten those regulations. The Democrats' intrusion into the markets began in 1977, with their vaunted Community Reinvestment Act, which encouraged bank loans to low- and moderate-income families. In 1995, the law was expanded, leading to an 80 percent increase in such loans.

Along with this, beginning in 1992, Congress imposed on Fannie Mae and Freddie Mac to purchase what we now know as subprime mortgages -- that is to say, risky mortgages. In 1996, the Clinton administration's Department of Housing and Urban Development, enthralled as ever to the Democrats' urge for social engineering, ordered Fannie and Freddie to assist home purchases by low-income earners seeking homes in higher-income neighborhoods -- more subprime mortgages! HUD expanded this project in 2000. Also in 1996, HUD began targeting the number of such mortgages, requiring that 12 percent of Fannie's and Freddie's mortgages assist low-income home purchasers in higher-income neighborhoods. In 2000, the number was increased to 20 percent.

The consequence of all the Democrats' meddling with real estate markets and with established regulations was that these subprime mortgages were secreted into bundles of mortgage packages and sold all over the world. Now we see a crisis, and magically it is blamed on Sen. McCain's party. The answer is to elect Sen. Obama and his lovable sidekick to the White House. Yet, as readers of this column read last week, the chairwoman of Sen. Obama's finance committee, Penny Pritzker, gutted her own bank with subprime loans and has had to pay $460 million in penalties. Moreover, Wall Street abounds with Obama supporters who prospered on these subprime dealings.

What? What is this? Change the subject to Sarah Palin -- you betcha!