Emmett McGroarty
|
Posted: Sep 18, 2017 12:06 PM
Share   Tweet
The opinions expressed by columnists are their own and do not necessarily represent the views of Townhall.com. 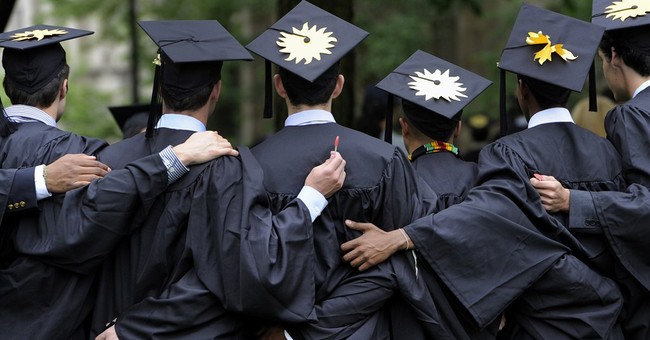 Editor's note: This column was co-authored by Jane Robbins.

Do you want the government tracking you, throughout your life, by combining your higher-education records with your employment, wage, and other workforce data? Such a “student unit-record” tracking system is fortunately illegal in America by virtue of a statutory ban. But deep-pocketed data-mongers such as the Gates Foundation-funded Data Quality Campaign have been agitating to overturn this ban, the better to put every American citizen under a microscope for study. And now a government commission has come perilously close to endorsing that frightening concept.

The Commission on Evidence-Based Policymaking (CEP) was created by legislation sponsored by House Speaker Paul Ryan (R-WI) and Senator Patty Murray (D-WA). (Note to Ryan: Anything Patty Murray wants is by definition bad for the country. Stop abetting her.) The theory is that the government must decide how to combine and use the mountains of data collected by various agencies to determine what, if any, government programs are working. (Note to Ryan: The programs almost certainly aren’t working. Just assume this.) The CEP spent about a year holding hearings on the issue – hearings dominated by advocates of greater data-collection and data-consolidation and data-use for “research,” generally without the knowledge and consent of the citizens being studied.

The CEP has now released its report. The lengthy document offers much material for commentary, but for our purposes we’ll focus on its treatment of the unit-record issue.

The good news is that grassroots privacy activists made an impression on the CEP’s deliberations. “[The CEP] received more feedback on the issue than on any single topic within the Commission’s scope,” the report says. “Nearly two-thirds of the comments [received by the CEP] raised concerns about student records, with the majority of those comments in opposition to overturning the student unit record ban or otherwise enabling the Federal government to compile records about individual students.”

The bad news is that the CEP wasn’t persuaded by this outpouring of pro-privacy sentiment. The Commission lamented the presence of various bans on national student databases (including those covering Head Start and Workforce Innovation and Opportunities Act programs), suggesting that “bans on data collection and use create a serious impediment to evidence-based policymaking, and could make it difficult or impossible to hold government activity accountable. Provided that the collection and use of data occur consistent with the Commission’s guiding principles, particularly with regard to privacy protection, such collection and use generally should be allowed.”

The CEP thus recommended that “Congress and the President should consider repealing current bans and limiting future bans on the collection and use of data for evidence building.” Given the absence of limiting language, this recommendation presumably covers not only the student unit-record prohibition but also the prohibition on creating a national student database at the primary and secondary level.

So the CEP wants Congress to consider creating lifelong dossiers on every American citizen who enrolls in any institution of higher education, with no opportunity to opt out or even be informed that this surveillance and tracking is happening. If China can do it, why can’t we?

Now the focus turns to Congress. Reports indicate that Congress is poised to act on “at least some of the Commission’s least controversial items.” Changes to data and privacy laws, which could be expected to provoke opposition from millions of lab rats, er, Americans, would be held for later this year or next.

But members of Congress from both parties have already begun the process of eliminating statutory privacy protections. Both the Student Right to Know Before You Go Act and the College Transparency Act of 2017 would overturn the unit-record ban and beef up the government’s capabilities of combining agencies’ data so that Big Brother can better examine how citizens are living their lives. It apparently doesn’t occur to the “conservative” sponsors of this legislation that it’s none of the government’s business how we’re living our lives. “Transparency” über alles.

Although these politicians and the CEP assure us that personally identifiable information will be protected, that will not happen: Even de-identified data can be easily re-identified, and in any event the government handles data-security with the same level of expertise it handles almost everything else – horribly (see here and here).

But even if the data could be adequately protected, the deeper problem remains. In the United States of America, the government should not be compiling dossiers on citizens, period. This concept should be anathema in a free society. If members of Congress don’t understand this, they should be informed that we do. Back to the ramparts!

Emmett McGroarty and Jane Robbins are senior fellows at the American Principles Project, a conservative organization based in Washington, D.C. that works to advance human dignity through public policy.