Elizabeth Yore
|
Posted: Jul 06, 2018 12:01 AM
Share   Tweet
The opinions expressed by columnists are their own and do not necessarily represent the views of Townhall.com. 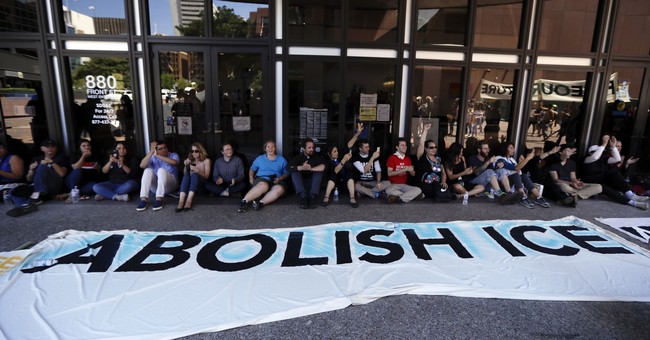 The grizzled, worn out Saul Alinsky tactics are alive and well with the Left flooding the streets and airwaves with demonizing chants of Abolish ICE.  The political strategy originates from Alinsky Rule 13: “Pick the target, freeze it, personalize it, and polarize it. Cut off the support network and isolate the target from sympathy.”

Pick the boogey-man (ICE) and pummel it into submission and oblivion. This tactic is so obviously strategic and employed to whip up the crowd into a frenzy, eliminating any thoughtful debate, discussion of the issues or rational solutions.

Time to push back. Let’s pick the target, ICE, and highlight its importance and innovation to protect the human rights of little girls. Attention, women in the pink hats! You should care about the civil rights of innocent girls, your immigrant sisters who are at grave risk, happen to be protected by ICE. That reality may not fit the frantic narrative of a heartless ICE, but as they say everyone wants the truth, but nobody wants to be honest.

The fastest growing import into the United States is not a product or technology, rather it is a barbaric practice called female genital mutilation which the CDC estimates over 500,000 women and girls in the U.S. are at risk for. The massive influx of refugees from FGM practicing countries is causing a massive uptick in this brutal procedure inflicted on little girls from 3-12.

With little fanfare, but with a phalanx of cooperating federal agencies, the often scorned ICE and HSI are proactively addressing this federal crime by populating a pilot project called Operation Limelight in major international airport hubs to educate and alert the public that FGM is a crime, whether performed in the U.S. or traveling out of the country for the procedure, common called, “FGM vacation cutting.”

With all the leftist hysteria about vulnerable immigrant children at the Mexican border, Operation Limelight addresses a real and impending danger for vulnerable and unsuspecting little girls.  This important project originating and implemented by ICE is being rolled out in major airports around the country and, sadly lost in the media noise about children at the border.

The initiative aims to safeguard and prevent young girls from being subjected to FGM by informing passengers traveling to high-prevalence countries about the U.S. laws governing FGM and the potential criminal, immigration, and child protective consequences of transporting a child to another country for the purpose of FGM. HSI HRVWCU intends to expand Operation Limelight USA to additional airports around the country, focusing on those airports serving the largest FGM- prevalent diaspora communities.

While the noise and rage from the Left may sound compassionate and instructive, it’s largely a strategic political ploy to implement wholesale amnesty. Fortunately, ICE goes about the people’s business thinking creatively and proactively to prevent the wholesale violation of the human rights of vulnerable little immigrant girls who need protection, not propaganda.

Members of the public who have information about individuals suspected of engaging in human rights abuses, to include FGM, are urged to call the ICE tip line at – 1-866-DHS-2423 (1-866-347-2423). Callers may remain anonymous. To learn more about the assistance available to victims in these cases, the public should contact ICE’s confidential victim-witness toll-free number at 1-866-872-4973