A Date of Infamy, 10 Years in the Making

Edward White
|
Posted: Dec 07, 2017 12:01 AM
Share   Tweet
The opinions expressed by columnists are their own and do not necessarily represent the views of Townhall.com. 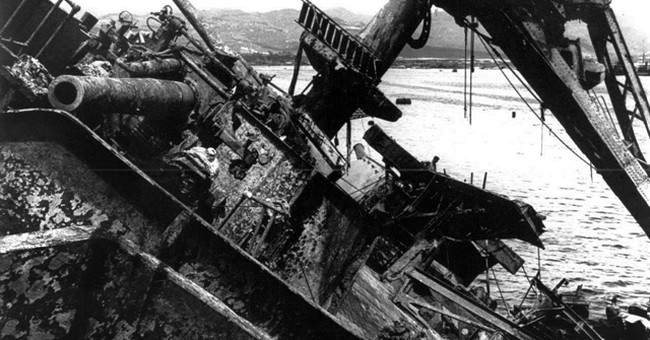 Every December, Americans are reminded of December 7, 1941, when Japan attacked the United States. The sneak attack on Pearl Harbor was the catalyst that led to our involvement in World War II. President Franklin Roosevelt, in asking Congress to declare war against Japan, famously called the December 7th attack “a date which will live in infamy.” That surprise attack was at least 10 years in the making as tensions between America and Japan grew.

As Germany was expanding its dominance in Europe during the 1930s, Japan was doing the same in Southeast Asia. The initial American response was “let them; it’s not our problem.” We had adopted an isolationist/non-intervention position as we were working our way through the global Great Depression and the horrible memories of World War I, which had ended a little more than a decade earlier.

To get out of its own financial problems, Japan decided to expand militarily. In 1931, Japan invaded Manchuria, which was controlled by China. China at the time was not a military power and Japan exploited that. Japan continued to expand into Chinese territory leading to a war with China in 1937. America supported China with money and equipment.

As Japan continued to grow militarily in Southeast Asia, the United States in early 1941 moved its Pacific Fleet from San Diego to Hawaii and started to build up its military presence in the Philippines. These moves were designed to deter Japan from further spreading into the region. They did not work. Japan expanded its presence in French Indochina and began to plan an attack on the Pacific Fleet in Hawaii.

In July 1941, the United States restricted the export of steel and oil products to Japan. The need for oil would later cause Japan to invade the oil-rich Dutch East Indies.

During the summer and fall of 1941, America and Japan negotiated to prevent a war. Behind the scenes, however, Japan worked on finalizing its plan to attack the Pacific Fleet. The Japanese believed if they were able to destroy the Pacific Fleet, America could back down, allowing Japan to continue its expansion throughout Southeast Asia. At the very least, it would give Japan time to strengthen its position in the region while America rebuilt its navy. In late November 1941, six Japanese aircraft carriers left Japan for Hawaii, despite the ongoing negotiations.

During the early hours of December 7th, hundreds of Japanese planes took off in two waves from the carriers and attacked our naval base at Pearl Harbor and our air bases in Hawaii. The Japanese inflicted great damage to the American military: multiple warships were either sunk or were damaged; close to two hundred aircraft were destroyed; and thousands of Americans were killed or wounded. (The three American aircraft carriers attached to the Pacific Fleet—Enterprise, Lexington, and Saratoga—were not at Pearl Harbor that day and were not damaged.) The Japanese also engaged in coordinated attacks in Southeast Asia, including against the United States-held Philippines.

The American people, galvanized by the attack on Pearl Harbor, shook off their isolationism and engaged our enemy with total effort and success as President Roosevelt noted would happen in his address to Congress: “With confidence in our armed forces, with the unbounding determination of our people, we will gain the inevitable triumph. So help us God.”

On December 7th, we remember and are grateful for the sacrifice of those who defended our freedoms and way of life during World War II.