The New Art of the Deal

Ed Feulner
|
Posted: May 25, 2018 12:01 AM
Share   Tweet
The opinions expressed by columnists are their own and do not necessarily represent the views of Townhall.com. 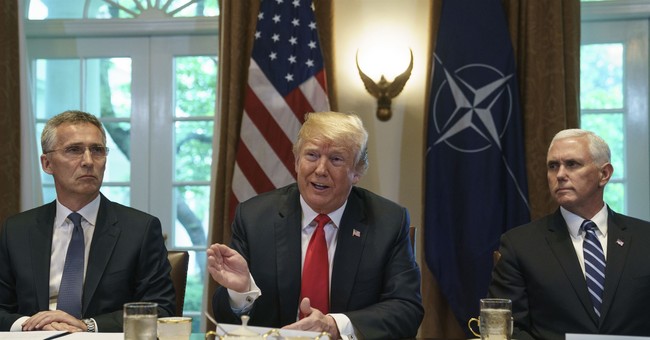 In a recent column, I spoke of the two current forms of populism and how they’re challenging the “Liberal International Order,” the governing philosophy that has guided the U.S.’s use of power in the service of freedom for ourselves and our allies since World War II. The question is, where does President Trump’s form of populism fit into what might be called the new version of the Liberal International Order?

We can find some clues in his 1987 book “The Art of the Deal.” When Trump invited me to serve on his Presidential Transition Team, I reread my copy of his book more carefully than I had the first time, and I found some very interesting points in there.

“If you are going to think any way, you might as well think big,” Trump, the legendary dealmaker, wrote. Well, running for president is certainly a big thought.

Another Trump dictum that impressed me was his view that when you think big, go into negotiations (or even discussions) and become a disrupter. In other words, come up with new ideas that are so far outside the boundaries of what is considered possible that you effectively change not only the debate, but the whole framework for considering the debate.

As I have said many times before, political change occurs at the margin. What President Trump does is expand that field of debate so that the margin moves significantly beyond the way it is conventionally thought of, either in Washington among the traditional thinkers and politicians, or around the world by both our friends and our adversaries.

Consider a specific example of an international encounter where Trump is thinking anew. During the presidential campaign, then-candidate Trump had this to say about NATO: “NATO is costing us a fortune and yes, we're protecting Europe with NATO, but we're spending a lot of money. … I think the distribution of costs has to be changed. I think NATO as a concept is good, but it is not as good as it was when it first evolved." He later added,"I think NATO may be obsolete.”

His bottom line: Members are not meeting their spending commitments. They have to pay up.

Trump said that many times, and every time he did, the political establishment of both parties went crazy. They said it was an outrage that he would talk that way.

Well, at least most of the political establishment felt that way. At that time, former Defense Secretary Donald Rumsfeld -- who also served at one time as the American Ambassador to NATO -- said to me, “Ed, I don’t understand it. When I was Ambassador to NATO and then when I was Defense Secretary, I would go around giving dinner speeches saying that Europe had to spend more on NATO, and all I did was put everyone to sleep. Trump says the exact same thing, and everyone dumps on him.”

Fast forward to today, and we have a new report from NATO pointing that in 2017, NATO members increased their military spending by a net 5 percent. It further noted that in 2014, only three countries in NATO plus the United States were meeting the 2 percent of GDP goal. By the end of this year, there will be eight countries, plus the U.S.

That didn’t happen because of “business as usual” at NATO. That happened because President Trump thought big -- and well outside the box.

This shouldn’t surprise anyone, though. When you change the framework of the debate and talk about the end of NATO instead of marginal changes to its funding, you can actually change the behavior of people who have a significant stake in the outcome of the negotiations.

It can be messy, and it can certainly upset people. But that, on a much bigger stage, is the art of the deal.