Ed Feulner
|
Posted: Mar 14, 2018 12:01 AM
Share   Tweet
The opinions expressed by columnists are their own and do not necessarily represent the views of Townhall.com. 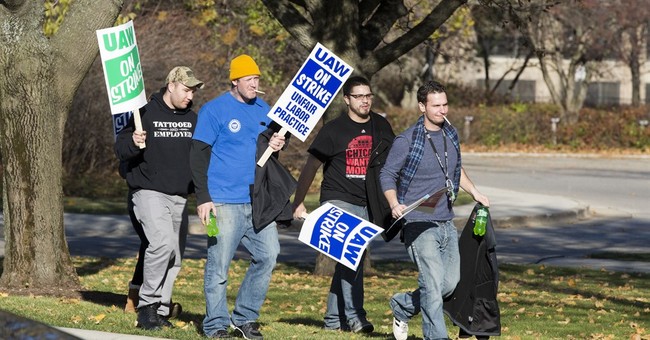 At least in theory. Things work a little differently in the real world.

Just ask Josh Herr, an employee at Kohler, a manufacturing company best known for making plumbing equipment. His workplace falls within the jurisdiction of United Auto Workers Local 833 -- and believe me, they want Herr to join.

He doesn’t want to, and the Wisconsin right-to-work law specifically says he doesn’t have to.

Ever since he started at Kohler, Herr’s been pressured repeatedly to become a member of Local 833. He’s told the union that he doesn’t see any value in it. He’s explained that he doesn’t want to turn over a portion of his paycheck to a group he disagrees with.

That should be the end of it, especially in Wisconsin, which is a right-to-work state. No one can blame the union for proselytizing, but a no is a no. You don’t keep asking and asking.

Local 833 did, though. And according to Herr, it went a troubling step beyond that to outright intimidation.

At one point, Herr found a sign on the time clock at the plant. It listed 19 workers, former “scabs” who had finally caved to the pressure and begun paying union dues. A gold star appeared next to each name -- a touch all kindergarten teachers will appreciate.

To really drive the point home, a note was attached that singled out Herr’s name in large, bold letters. It referred to him as a “pottery member who refuses to join the union,” and labeled him pointedly as “Not a Union Brother.”

Worse, Herr says, Tim Tayloe, Local 833’s president, called him at work and threatened him while he was doing his job.

“He said, ‘We really don’t like when people don’t join the union’,” Herr said. “He told me there were two other people in the pottery building who didn’t join the union and that nothing good happened to them. He said, ‘I don’t want anything bad happening because you’re not joining’.”

In a nice twist of irony, Herr points out, Local 833’s tactics directly violate the terms of the union’s collective-bargaining agreement.

“It says there shall be no discrimination, coercion, intimidation or threats against employees because of membership or non-membership in the union,” he told the MacIver Institute for Public Policy, a Wisconsin-based think tank. “It is literally written on the front page of the Kohler rule book.”

From pressure to shaming to threats. Behold the face of unions, 2018.

Tayloe insists that Herr is lying, and that the posted signs aren’t meant to encourage violence: “Nobody said to harm anybody. This is not the 1940s.”

Indeed it isn’t – and for unions who have been hemorrhaging members for decades, that’s the problem. When you look at the numbers, you get a whole new perspective on Local 833’s refusal to take no for an answer.

So unions have a strong incentive to lean heavily on workers who don’t fall into line. They’re helped by the fact that few of these workers can withstand the pressure.

Herr, fortunately, is one of them. “He can handle the union games,” writes MacIver’s M.D. Kittle for the Daily Signal. “He says he went public with his experiences because he knows there are other Kohler employees who have simply given in to the union because they didn’t want to deal with the aggravation, the harassment.”

Unions are supposed to represent workers and their interests. How sad that the ones truly doing that job today are those who stand up to bullying unions.