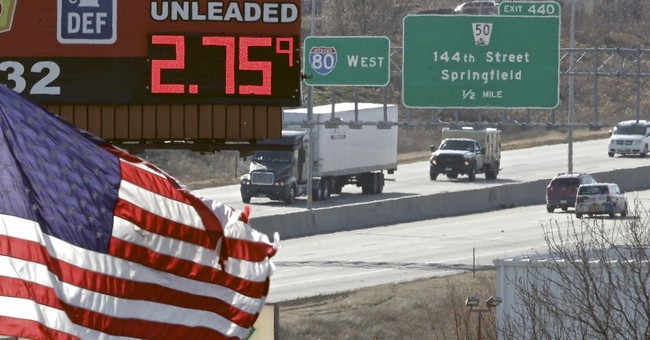 If you’re like most Americans, you haven’t been questioning the welcome drop in gasoline prices. You just fill ’er up and feel grateful that you’re spending less.

But why has this remarkable drop come about? And what can we do to help keep prices lower?

Some of it, unfortunately, is beyond our control. Worldwide demand for oil is down now. That always causes the cost of gasoline to drop.

But the other side of the equation -- the part that is under our control -- has gone largely unheralded in many media accounts: the boom in U.S. energy production. Simply put, we’re producing much more energy domestically these days, and that is, predictably enough, pushing prices downward.

Since 2008, we’ve increased our domestic supply of oil by 50 percent. Thanks to technological breakthroughs such as hydraulic fracturing (“fracking”) and horizontal drilling, we’re able to find and extract far more oil than we possibly could have years ago.

Oil production in states such as North Dakota, Texas and Oklahoma has doubled in the last six years. The U.S. is now the world’s number-one producer of oil and natural gas. Signs that read “No to fracking” might as well read, “Yes to higher prices.” And “no” to the more than 100,000 jobs created in the oil and gas extraction industry over the last few years.

It all comes down to supply and demand. It’s pretty simple. We can’t do much about worldwide demand, but we can do a lot about supply.

Here’s what not to do: subsidize “green” energy such as wind and solar (or any form of energy, for that matter). If green forms of energy show promise, believe me, the market will put resources behind them. The fact that wind and solar producers are so wholly dependent on government handouts (i.e., taxpayer money) is telling.

Yet the push to prop them up continues. Consider the $440 billion tax package lawmakers recently hammered out. It contains a provision that would have revived the wind tax credit that expired last year. Yet the wind industry already gets $56 in federal tax credits per energy unit produced.

So what should we do? Stop impeding markets. Here are four steps policymakers should take, courtesy of Heritage Foundation energy expert Nicolas Loris:

1. Lift the ban on crude oil exports. A recent IHS study found that removing the ban would lower gasoline prices by 8 cents per gallon, saving drivers $265 billion over 15 years and adding nearly 1 million jobs by 2018.

2. Lift the drilling bans and approve the Keystone XL pipeline. We need more exploration in the eastern Gulf of Mexico and the Atlantic and Pacific coasts. We should also be conducting more lease sales off Alaska’s coasts. Alaska’s Arctic National Wildlife Refuge is another abundant source of oil, with an estimated 10.4 billion barrels of oil resting beneath a few thousand acres.

3. Repeal the ethanol mandate. This rule forces refineries to blend increasing amounts of ethanol into gasoline each year, reaching 36 billion gallons in 2022. It’s already driven up fuel and food prices, according to multiple federal agency and government-backed studies.

4. Prohibit greenhouse gas regulations. The Department of the Interior has already suspended oil and gas leases because of their alleged impact on climate change. Coming greenhouse gas regulations from the Environmental Protection Agency will block and increase the cost of energy production -- and producers will pass those costs on to consumers. Yet the regulations will have no meaningful impact on the climate, the EPA has acknowledged.

Notice the one thing these steps have in common? It’s government getting out of the way. The secret to extending the streak of lower energy prices, it turns out, is no secret at all: Let markets work.

About the Adam Schiff and Ed Buck Photo Rumor...
Redstate
Schiff on calling Hunter Biden in exchange for John Bolton: "This isn't like some fantasy football trade"
Hotair