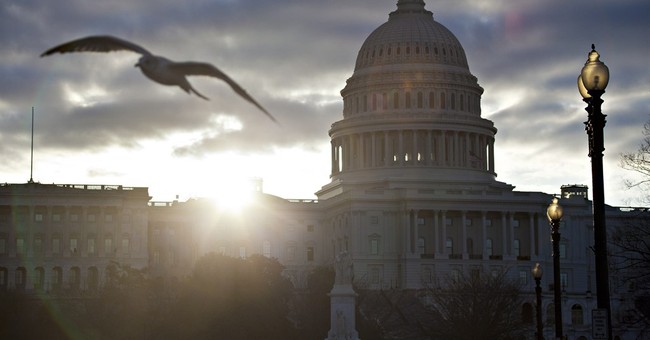 Saying government spending is out of control is an understatement on the scale of saying that Michael Jordan was a good basketball player or Babe Ruth hit some home runs.

Thanks to unbridled spending, corporate bailouts, and the takeover of the best health-care system in the world, America stands on the verge of a financial cliff that endangers our future, our children’s future, and our grandchildren’s future.

But it doesn’t have to be this way. Here is a series of reforms that can help us avoid fiscal catastrophe:

Enact spending caps. Washington has no enforceable limits on its spending. As long as Congress remains under pressure to spend, members need annual spending caps to help them set annual priorities and make the necessary trade-offs.

Congress should enact a firm cap on the annual increase in total government spending, limited to inflation plus population growth. It should also include triggers and other protections to prevent lawmakers from bypassing this cap.

Rein in entitlements. Social Security, Medicare and Medicaid are driving long-term deficit growth. It is impossible to rein in runaway spending significantly without fundamentally reforming these programs.

Empower states. Washington taxes families, subtracts a hefty administrative cost, and sends the remaining revenues back to state and local governments with specific rules dictating how to spend the money.

Instead of performing many functions poorly, Congress should focus on performing a few functions well. Most highway, education, justice and economic development programs should be devolved to state and local governments, which have the flexibility to tailor local programs to local needs.

Empower the private sector. Anyone who has dealt with the post office or lived in public housing knows how wasteful, inefficient and unresponsive government can be. Government ownership of business also crowds out private companies and encourages protected entities to take unnecessary risks.

After promising profits, government-owned businesses frequently lose billions of dollars, leaving taxpayers to foot the bill. Any government function that can be found in the yellow pages should be a candidate for privatization.

Ban corporate welfare. Even before the financial bailouts, Washington spent more on corporate welfare ($90 billion) than on homeland security ($70 billion). Americans should not be taxed to subsidize profitable companies. Lawmakers could start by reforming America’s largest corporate welfare program: farm subsidies, which are overwhelmingly distributed to large, profitable agribusinesses rather than struggling family farmers. Other programs, such as the Advanced Innovation Program (formerly the Advanced Technology Program) should be cut.

Eliminate pork and waste. Each year, Washington loses billions of dollars to payment errors and pays billion more to maintain vacant federal properties. Washington also diverts about $20 billion annually into pork projects, corrupting the legislative process by assigning taxpayer dollars on the basis of lobbying rather than merit.

Without serious planning and foresight, America’s future will be grim. The unrest in Europe in recent years, from Greece to Great Britain, is a warning, a crystal ball through which we can see what might well happen to us should we succumb to the temptations of irresponsible government.