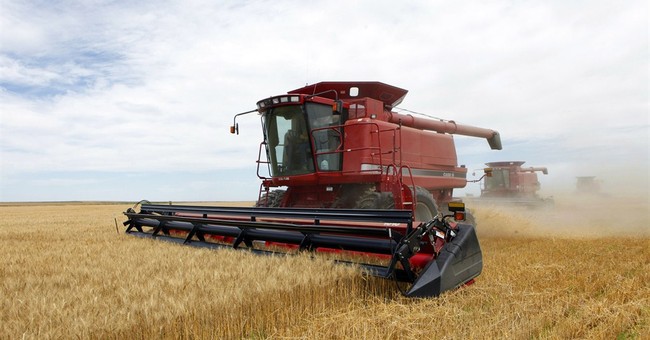 When you hear that Congress has taken up the “farm bill,” what images come to mind? Farmers in overalls, driving beat-up tractors, trying to scratch out a living from the soil? A lot of politicians are counting on that.

But while this “Grapes of Wrath” scenario may be handy when it comes time to drum up support for the bill, it doesn’t begin to match reality. Consider these more typical recipients of federal farm subsidies (i.e, your tax dollars):

· Agriculture Secretary Tom Vilsack: During that same period, he received $82,874 for his 592-acre farm in Davis County, Iowa.

· Manhattan residents: There are no farms in this, one of the most urban areas on earth, but residents there have collected subsidies totaling nearly $9 million in the past seven years.

· The Rockefeller family:John D. Rockefeller may have started the family fortune by founding Standard Oil in 1870, but Mark F. Rockefeller and David Rockefeller added to the coffers with $356,018 and $591,057, respectively, during the last seven years.

You might think these are some high-profile exceptions to the norm, but that’s not the case. According to the Agriculture Department’s own Economic Research Service, two out of every three farms with income exceeding $1 million annually received an average of $54,745 in government payments in 2011.

Here’s the real irony: These subsidies represent a serious threat to the farmers we all tend to picture when we think of the farm bill.

“The subsidies collected by large enterprises make it more difficult for small farms to stay in business,” Heritage Foundation Research Fellow Diane Katz writes. “The flow of free dollars to big farms increases demand for farmland, which, in turn, raises the price of property. Smaller players and newcomers are priced out or left to compete in niche markets.”

These ludicrous payments are only part of the problem, believe it or not. Consider what makes up 80 percent of the farm bill: food stamps. Yes, you read that right.

And why are they there? Sen. Thad Cochran (R-Miss.), ranking member of the Senate Agriculture, Nutrition, and Forestry Committee, admits that it’s “purely from a political perspective. It helps get the farm bill passed.”

Worse, the Agriculture Department has been pushing to get more people on food stamps. The rationale is that it stimulates states’ economies. And states have been responding.

Small wonder that food-stamp enrollment has doubled under this administration. Deliberately encouraging dependency is a far cry from providing temporary help to the truly needy.

Plus, there’s another benefit, from a legislative perspective. It’s easier to hide pork-barrel spending in a large bill. Better to sneak in money for a special-interest project when it’s embedded in a bill few people are likely to read, including lawmakers.

Will we finally shoo the rich and famous away from the federal trough, and make other changes to our nation’s outdated farm policy? Or bring another bumper crop of subsidies to market?