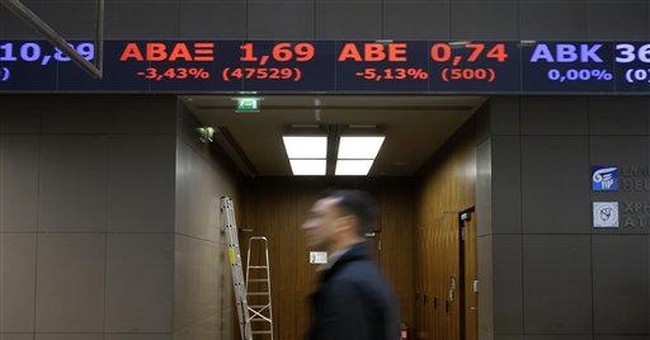 Unveiling his latest budget proposal, President Barack Obama announced: “The bottom line is this: We simply cannot continue to spend as if deficits don’t have consequences; as if waste doesn’t matter; as if the hard-earned tax dollars of the American people can be treated like Monopoly money; as if we can ignore this challenge for another generation.”

Unfortunately, few in Washington are listening -- including the president himself.

His budget would boost spending to $3.8 trillion in the next fiscal year. It would generate a $1.5 trillion deficit for next year alone, on top of the trillions American taxpayers already owe.

Now, a trillion dollars is more money than any human could even imagine. So let’s break these massive numbers down into something more manageable.

During the final years of the Bush administration, the federal government was spending about $24,000 per U.S. household. If his budget goes forward as planned, President Obama would increase spending to an inflation-adjusted $36,000 per household by 2020. That’s a 50 percent increase in just a decade. Think many of those households will increase their income by that much?

The big spending will add up to big debts. In just 10 years, Obama’s budget would pile some $75,000 per household in additional debt into the laps of our children and grandchildren. And there’s no end in sight.

Under Obama’s planned budget, the annual deficit would still top $1 trillion in today’s dollars during the year 2020, meaning that even in the best possible case (no more recessions, no more wars, no more terrorist attacks), the tide of red ink would keep rising.

President Obama came into office last year criticizing the Bush administration (justly, in many cases) for its big spending. Yet even though the president’s two costliest proposals -- health insurance “reform” and a cap-and-trade bill to punish the use of carbon -- have stalled in Congress, he has still managed to preside over the largest borrow-and-spend spree in American history. His budget plan calls for borrowing 42 cents out of every dollar it would spend this year.

If the president is serious about dealing with spending, he needs to start showing that today. A good first step would be to repeal the economic stimulus package he raced through Congress last year. For one thing, it hasn’t worked. Unemployment has topped 10 percent. That’s higher than the administration predicted it would be without the stimulus.

Meanwhile, in spite of the administration’s claims that it has “saved or created” jobs, the fact is that it has mostly wasted borrowed money. To cite just one example, a program in Texas spent $3.7 million in federal funds last year to weatherize just 47 homes. That’s $78,000 per home -- an awful lot of caulking.

The administration should also begin reforming Social Security and Medicare to make them sustainable for the long term. Eugene Steuerle of the Urban Institute recently found that every cent in federal tax revenue last year was used to pay for entitlement programs. That’s a historic first, but it’s a sign of things to come. And this year, the Congressional Budget Office found that Social Security will bring in less in taxes than it spends on benefits.

A bipartisan commission would be a good start, but only if it is able to consider spending cuts, not simply tax increases. The president could also adopt Rep. Paul Ryan’s plan, “A Roadmap for America’s Future 2.0.” The non-partisan Congressional Budget Office has certified that it could solve our nation’s long-term fiscal problems.

It’s time for the president’s actions to match his words. A budget crisis is upon us -- and spending our way out of it isn’t an option.