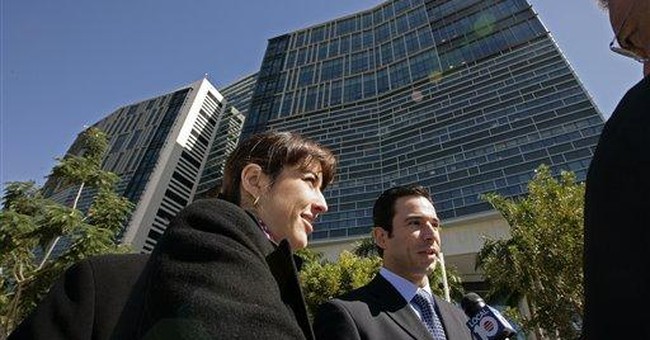 Your parents probably told you that you can’t get something for nothing. But your government is sending a very different message. For now, at least. The non-partisan Tax Policy Center recently released a report finding that almost half (47 percent) of American households will pay no income taxes this year. Many, in fact, will actually come out ahead in their dealings with the government, because they qualify for refundable tax breaks such as the earned income tax credit.

This probably explains a Gallup poll from April which found that 48 percent of Americans said the amount they pay in federal income taxes is “about right.” Even the polling company was surprised by its findings. “Since 1956, there has been only one other time when a higher percentage of Americans said their taxes were about right -- in 2003, when 50 percent did so after two rounds of tax cuts under the Bush administration,” Gallup wrote.

But the finding makes sense. If you’re paying nothing, that probably does seem like a good deal. Even if it isn’t either fair or sustainable.

When government gives people cash and programs that cost more than they pay in taxes, most of them will favor ever bigger spending and more government. Who doesn’t love a “free lunch”? And, having had one today, who wouldn’t want one tomorrow, next month -- indeed, every day?

People bagging bargain-basement benefits will vote for candidates who promise even more extravagant “gifts”: more spending on education, more on roads, more on health care. And if the candidates promise to “tax the rich” to pay for all these benefits, so much the better, right? But, like the fabled goose that lays gold eggs, “the rich” are already doing more than their part.

Economist Curtis Dubay of The Heritage Foundation ran the numbers earlier this year. He found that in 2006, the top 20 percent of earners made 55.7 percent of all pre-tax income, up slightly from 54.8 percent in the year 2000. Yet at the same time, their share of federal income taxes increased from 81.2 percent to 86.3 percent.

And the further up the income ladder one goes, the greater percentage of the total tax burden one shoulders. According to the IRS, in 2007 the top 1 percent of taxpayers paid more than 40 percent of all federal income taxes. That’s more than the bottom 95 percent combined paid.

At some point, “the rich” will simply decide enough’s enough. They could choose to work less and earn less, or retire completely and concentrate on sheltering their assets. Or they might opt to move to a country with a friendlier tax climate. This tax-driven migration happens all the time as the successful flee high-tax states for more tax-friendly climes.

The federal government can’t continue to play Robin Hood, taxing from the few and handing goodies to the many. If our policy punishes success, we’ll have fewer successful entrepreneurs. And the resulting weaker economy means less revenue for the government. Ironically, one of the surest (and least desirable) paths to a smaller government is an economy destroyed by high taxes on the successful.

But there’s a way to keep the golden goose at home and producing: A flat tax, one that applies the same, low rate to everyone regardless of income. Democratic government works only when almost everyone is required to ante up something. It’s time to take the free lunch off the menu for everyone except the truly poor.