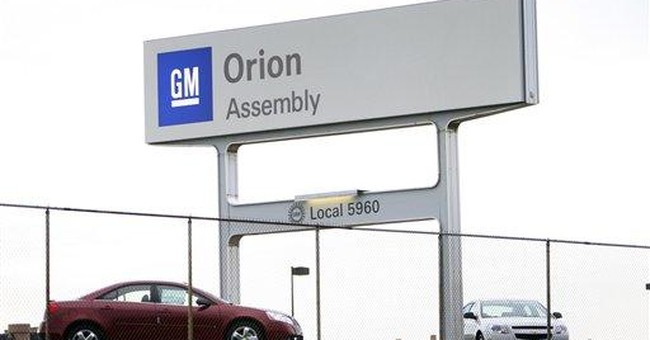 As a rock-ribbed conservative, I seldom agree with the socialist president of Venezuela. But it happened last week.

“Hey, Obama has just nationalized nothing more and nothing less than General Motors. Comrade Obama!” Hugo Chavez declared during one of his customary rants on state TV. He added that if he and Cuba’s Fidel Castro weren’t “careful,” they might “end up to [Obama’s] right.”

Chavez has nationalized most of his country’s economy. That’s helped turn the country into a “Repressed” economy in Heritage’s annual Index of Economic Freedom. Crime, corruption, inflation and food scarcities prevail in Venezuela, even though the country has taken in hundreds of billions in oil revenues in recent years.

That’s because nationalization discourages private investment and innovation. So Chavez’s oil production is likely to plummet, just as Mexico’s has under a nationalist protection scheme.

Americans have reason to be concerned as they watch our government go down a similar road with one of our critical industries: automobile manufacturing. On June 1, the federal government announced GM would enter bankruptcy protection. But not traditional bankruptcy.

Under a plan crafted by the Obama administration, Washington will own some 70 percent of the new GM, while the United Auto Workers union will own almost 20 percent. The federal government will pour another $30 billion into GM on top of the $20 billion taxpayers have already shelled out.

Still, “What I have no interest in doing is running GM,” President Obama announced on June 1. “GM will be run by a private board of directors and management team with a track record in American manufacturing that reflects a commitment to innovation and quality.”

Obama has also put 31-year old Brian Deese, a “a not-quite graduate of Yale Law School,” as The New York Times puts it, in charge of restructuring GM. Deese, “had never set foot in an automotive assembly plant until he took on his nearly unseen role in remaking the American automotive industry,” the newspaper says.

Meanwhile, the new mayor of Detroit recently spoke with Obama, and told reporters afterward that the president supports keeping GM headquarters in that city. If Obama insists he has “no interest” in running GM, why is he so involved in the day-to-day operations of the company?

Obama also says “The federal government will refrain from exercising its rights as a shareholder in all but the most fundamental corporate decisions.” That’s a tough sell, too. Even before the government owned most of GM and much of Chrysler (the second Big Three automaker Washington recently guided through a special bankruptcy), it was involved in designing cars.

Last month Obama declared that automakers must reach a fleet average 35.5 miles per gallon by 2016. To accomplish that would require a comprehensive makeover of the entire automotive industry -- both domestic and foreign. After all, as USA Today pointed out, only 11 cars manufactured today meet that standard.

But the federal government, as always, has a plan. EPA Administrator Lisa Jackson has declared that, “What this country needs is one single national road map that tells automakers ... what kind of car it is they need to be designing and building.”

In days gone by, that “road map” was the free market -- you and me. Automakers built cars they thought people would want to buy. If they were correct, sales were good. If they were incorrect, they had to cancel product lines and return to the drawing board. It’s why Ford has made Mustangs for decades, but mothballed the Edsel after only three years.

Government ownership has never worked overseas, and it won’t work here. Washington should get out of the automotive business as swiftly as possible.

The recent European elections show the rest of the world is edging away from statism. This is no time for America to lurch left so it can keep company with outcasts like Cuba and Venezuela.