Battle for the Border 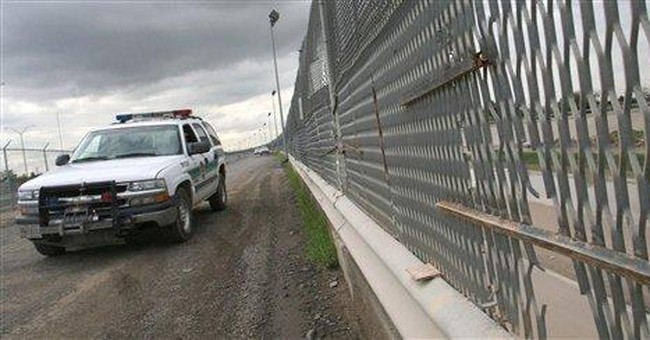 Almost two years ago I visited southern California to watch the U.S. Border Patrol at work. The federal government was building a fence and, with help from the National Guard, federal agents were stepping up patrols and slowing the flow of illegal aliens across our southern border.

But in homeland defense, as in politics, there are no permanent victories. Most illegal migration is now happening further east. With portions of the California border fenced off, smugglers are moving people and drugs through Arizona.

Department of Homeland Security Secretary Janet Napolitano has taken some good first steps. DHS is redeploying more than 360 additional officers and agents, most to the border and some to Mexico itself. Washington will also send more technology to the border, including biometric identification equipment to help catch crossers coming north, and mobile X-ray units to recover cash and weapons headed south.

Partnering with locals is “one of the fastest, most effective and most cost-effective ways to get more assets into the border war right now,” wrote James Carafano, a fellow in national security at The Heritage Foundation, after his own recent trip to the border. “It is going to take an integrated federal-state-and-local law enforcement effort to beat the cartels on this side of the border, and we have to make the locals a stronger part of that team.”

The good news is that local sheriff’s deputies have made a dent in drug smuggling. With closer cooperation from Washington, they say they could make a real difference, and perhaps even start to roll up the cartel organizations north of the border.

According to The Washington Post, she “has delayed a series of proposed immigration raids and other enforcement actions at U.S. workplaces in recent weeks, asking agents in her department to apply more scrutiny to the selection and investigation of targets as well as the timing of raids.” That’s a mistake.

The Bush administration didn’t get serious about cracking down on illegal immigration and illegal workers until the last two years. The laxness of those early years proved that when the feds mostly shrug at border breaches and undocumented workers, it only gives aliens a larger incentive to enter the country.

After all, once they’re across the border, there’s virtually no chance they’ll be caught and deported. In fact, roughly a third of the illegal immigrants in the U.S. are people who came here with temporary visas but never left. Interior law enforce­ment is the only way to remove them.

Instead of backing away from the tentative Bush approach, DHS ought to increase workplace enforcement. Federal officials need to work more with state and local govern­ments to put in place mechanisms such as “E-verify,” a system that can ensure employers aren’t hiring illegal immigrants and can crack down on those already living here illegally.

Finally, the federal government can slow the tide by helping countries in Latin America develop healthier economies. That way, our southern neighbors wouldn’t feel compelled to leave home. As for Mexico specifically, the U.S. needs to help its government battle the drug cartels that are trying to destabilize it. The drug war on our southern border is a true war, one that Mexico cannot afford to lose.

Enforcement makes a real difference. The number of illegal aliens in the U.S. is dropping, partly because of the economy, but also because of enforcement. Now is not the time to back off.

The threats to Homeland Security have changed over the years. America’s approach to protecting itself must change as well. Securing the border and upholding the rule of law are a big part of that.