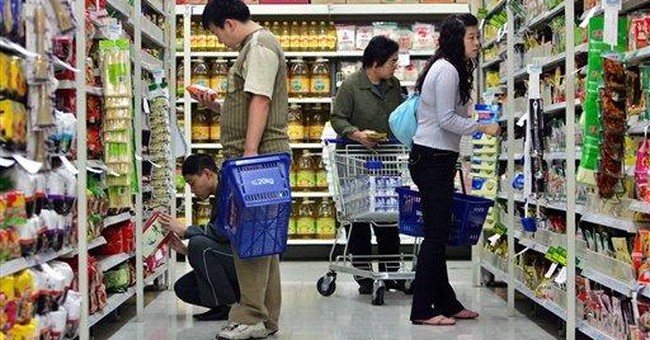 Back in the 1990s President Bill Clinton and British Prime Minister Tony Blair crafted what they called a “third way” of governing. Supposedly this approach would be neither liberal nor conservative, but would split the difference.

Sounds fine in theory. It didn’t work that well in practice, though -- at least not to the satisfaction of liberals. Clinton and Blair found that, whether the issue was foreign or domestic policy, any attempt to find middle ground needed to be mostly conservative, or it would fail.

That’s important for policymakers to remember today, with our economy in recession and lawmakers determined to “do something” to pull it out.

On one side are lawmakers eager to pass the traditional liberal plan: an “economic stimulus” package that includes massive spending on public works to “create” jobs. It also involves having the government write checks to selected Americans, hoping they’ll spend the money and boost the economy. Never mind that we tried giving money away earlier this year, and it didn’t work. They want the government to throw still more dollars around.

On the other side is a group that’s proposed a more conservative approach, a “tax holiday.” Instead of having the federal government attempt to stimulate the economy through public works and rebates, these lawmakers propose suspending the collection of federal taxes for a few months. That would leave Americans with more money in their pockets.

That’s certainly a better approach than the government holding onto their money. But it’s not the ideal choice to spur the economy and generate jobs.

The third (and best) way would be the true conservative approach: Fixing the tax code so it encourages greater economic growth by improving the long-term rewards for investing in job-creating enterprises.

The best way to stimulate the economy is to make changes that will last for years, so people know they can count on those changes well into the future. That way Americans who are considering starting a business, making a major purchase or investing in the market can know what their future after-tax return is going to be -- not simply for the next three months, but for the next three years, or more.

As a start, lawmakers should extend (a good idea) or make permanent (a better idea) the tax rate reductions passed in 2001 and 2003. Most are set to expire in 2010. That’s only about a year away, so investors are skittish; they have no idea what the tax rate will be on their income in the years ahead. By reassuring them that rates will remain low, lawmakers can revive the economy.

Next, to enable American companies to compete with those overseas, lawmakers should reduce the corporate tax rate to 25 percent (good) or lower (and the lower the better). And make this change last at least a decade, if not permanently. American companies today toil under some of the highest corporate tax rates in the world. Lowering these rates will encourage growth and create jobs.

Another help: Further reduce marginal income tax rates for at least five years. That beats a one-time tax holiday if you want to reassure working families that their taxes will be affordable in the years ahead.

Finally, Congress should extend “bonus appreciation” for at least two more years. This allows a business to deduct half the cost of equipment it buys in the year it’s purchased. That makes new equipment more affordable and thus encourages businesses to upgrade, a policy that helps get the economy moving. It would be like a green light to America’s job-creators.

Lowering tax rates on capital and labor is the best possible tonic for our economic ailments.

A “tax holiday” certainly trumps another big spending “stimulus” package, because it would allow Americans to spend more of their money on what they want. But to really kick-start our economy, lawmakers should choose a third way: Get tax rates down for years -- or permanently.